'Busters Hidden Treasure' was released for the Megadrive. The game was a platformer, spread over 33 different stages, with a Super Mario World style world map you use to traverse the levels. Many levels had alternate exits leading to harder levels. The plot was basic, but ok, it saw you as Buster Bunny heading to a Island to search for treasure buried there. Montana Max also headed there, and with a Scientest's help he attempts to get to the treasure before Buster. The game was quite typical in that you killed enemies by leaping on thier heads. If you moved long enough you would break into an insane run which let you slide tackle the enemies. The games locations were varied, and split into seperate groups of themed levels. Starting off in the grasslands with the familier Tiny Toons theme as the background music , it led to dark forests, dank caves, snowy mountains, and a big factory. The levels were well designed, and lots of variety to what you did, with underwater levels in which you swam, to levels full of zip lines, and elevators. 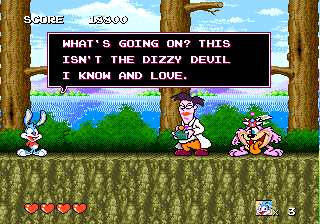 The end of each group of levels see you fight a boss. This usually involves one of the characters from the show such as Dizzy Devil, Plucky Duck etc attacking you while under mind control from a creepy looking scientest.

Lots of characters from the series make appearances, as bosses, special moves (think the mortar from Streets of Rage), and enemies. A real fun game. 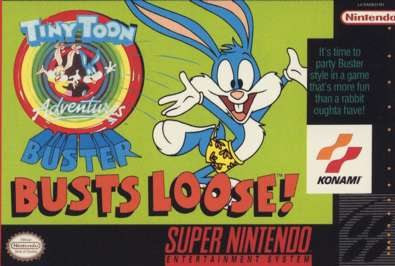 'Buster Busts Loose' was released for the Super NES. The game was set over 6 or 7 levels. It looked really good, and had great music. As far as I can tell the game has no plot. Most the levels are set as if they are a film, so theres a Western themed level, a level set in a haunted house, and even a level which is basically Star Wars, complete with Storm Troopers, and a Darth Vader look alike boss. The problem with this game is there is a total lack of any coherance to the levels, they have nothing in common, and just seem really disjointed and random. Also some of the levels are really short, such as the bizarre American Football level.

Rather than being able to jump on enemies heads, Buster defeats enemies by doing a weird floaty somasault kick at them. In this game also he can run, and slide tackle enemies, and has a cool move whereby he can run up walls as long as his stamina gauge holds out. Again characters from the cartoon are used as bosses, and as enemies.

After each level is a randomly generated bonus game where you can earn extra lives. At the time I thought this was ace, but playing it recently I have realised it is actually really boring. You earn lives by playing bingo, or other similer style mini games.

The game is good, but is not great. Too short, and just not as fun or entertaining as the Megadrive version. The winner therefore is...the Megadrive version. Thier all so cheap nowadays you might as well get both versions though. I also remember the Gameboy Tiny Toons game being ace, and the NES one looks real good.
#Community    #Retro
Login to vote this up!