I've been meaning to take the pilgrimage to Arcade Infinity for a long while now, and I finally made it out there this weekend. I originally heard about the place because Stella mentioned a place called "AI" on an episode RetroforceGO! It took a bit of poking around to make the leap from "AI" to "Arcade Infinity," but once I found out what it was, I knew I had to make the journey out there some time soon. 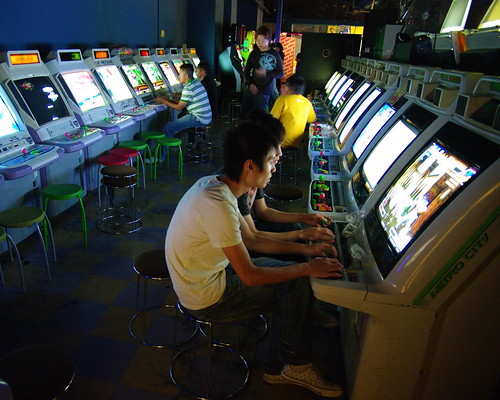 Being the lucky punk that I am, I happened to show up in the middle of a Street Fighter IV tournament, which means that the place was packed, and filled with good fighting game players, and even a few faces I recognized from the finals of the Street Fighter IV tournament over at Universal City Walk, back around when the game first came out. It's amazing to watch people who are really good at fighting games play against each other, and believe me when I say that there was a decent-sized crowd around the machine.

Of course, I didn't know there was going to be a tournament when I got there, so there was no Street Fighter IV playing for me. Not that I would even want to play against these guys, as I'm pretty certain that they'd slaughter me. Instead, I got to watch some really great matches, and I got to play some games that I wouldn't have been able to play anywhere else, starting with...

King of Fighters XII
This game is gorgeous. Even before I sat down to play it, this game might be the best looking fighting game that I've ever seen. It was up on a big screen, so the game was blown up enough that I could see the pixels in the sprites, distinct from the background, especially because the camera zooms in and out depending on how far the characters are from each other.

And yet, despite the pixelation, the sprites look amazing. I think it's the shading and the shadows on them, but whatever it is, the sprites have presence. The sprites don't feel flat at all. They're movements have heft and weight, and playing the game feels deliberate, kind of the way that playing Third Strike feels deliberate. Some might not like the slower pace, but I've always really enjoyed that kind of feel in a fighting game. And even when the fighters move into a shadowed part of the stage, the sprites look darker. It's a testament to the art direction and the animation just how amazing everything looks in that game.

The button were laid out as four button in a row, which kind of threw me off since I'm not used to playing SNK fighters. It took an entire match before I realized that the button order was Light Punch, Light Kick, Heavy Punch, Heavy Kick. And not having the punches and kicks laid over each other, and instead in a row made playing the game a bit more awkward for me. (The instructions on the cabinet were in Japanese.) Also, the game makes you pick three characters, and you only get one round with each of them, so I didn't have a lot of time to get the hang of any one character either. Considering the game only has about 20 characters, I couldn't figure out why you have to pick three.

However, despite my own personal difficulties with the game, most of them stemming from the fact that I don't really play King of Fighters games, I have to say that I really like KOF XII.

BlazBlue
BlazBlue is the new game from the guys that make Guilty Gear, which to be honest, is a fighting game series that I've never liked very much. I didn't know much about BlazBlue, except that it wasn't out in the US yet, and that it looked cool, so I decided I'd give it a try.

The screen on the BlazBlue machine was smaller than the screen that I was playing KOF XII on, but I have to say that BlazBlue looked sharp. Really sharp. Like, I really couldn't see any of the pixels on the sprites sharp. However, even despite the appearance of a higher resolution, I still think that KOF XII just looks better overall. I like the artistry in that game more than in BlazBlue.

Luckily, my control problems from KOF wouldn't carry over to this game however, because it only has three attack buttons and a special button. And the game asks you if you'd like the special button to be the rightmost button or the leftmost button right after you pick your character, so you know where that button is. Personally, I really like the idea of of simplifying the control scheme by just having a weak/medium/strong attack instead of both punches and kicks. It allows for a much more user friendly experience (something that fighters have always had problems with), and it also ensures that the game will be easier to play when some kid with a PS3 is inevitably forced to play it with a game pad. Tatsunoko vs. Capcom sports a similar kind of control scheme too. I definitely liked playing BlazBlue more than what little of Guilty Gear that I've played.

BlazBlue is pretty fast, flashy, and combo happy, much like a Marvel vs. Capcom 2, or something like that. But BlazBlue definitely has it's own flavor. All the characters are off-the-wall not only in terms of design, but in terms of abilities as well. I fought against one opponent who used a girl that could throw little electrified cat things, and blow wind back and forth over the stage. And also, the matches in this game go to the best three rounds, so I got the hang of my character much faster than in KOF where I was constantly changing characters. I could even see my sister playing and enjoying BlazBlue, but because it's so cool and flashy and ridiculous. Even though I liked King of Fighters XII a little bit better, if I had to buy only one of these to take home with me, I think I'd have to buy BlazBlue. It would definitely be easier to find some not-so-hardcore friends to play it with me.
.
.
.
#Community
Login to vote this up!