10 things I learned this week: An End of an Era Edition 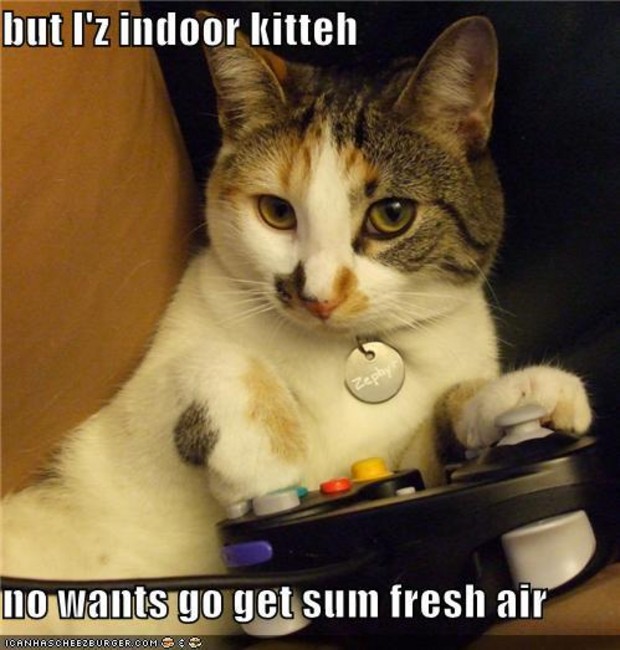 You see, I've been in a funk for this past week because I had gotten news from home that my cat died. Normally, I wouldn't bother saying this here but my cat wasn't necessarily the most active of animals, and as a result she spent most of her time lounging around my gaming setup. All the games I've played for the last 10 years was with her lazy ass next to me. Pretty much all of my favorite games I beat with her, Okami, RE4, Fatal Frame 2, Gears of War, Condemned, Shadow of Colossus, etc. Hell, she was there for all 250 hours I put into Oblivion. That and pretty much every FNF I ever participated in she was there passed out in front of my old ass TV. I liked to think of her as a good luck charm that kept Grim's goddamn magic grenades off of me. And learning that she passed away, well, it feels like I lost one of my gaming buddies.

Now, I'm not saying this to get sympathy or any bullshit like that. I guess you could say it is more of a tribute, for lack of a better term. People always look back and write about their memories of videogames, so I think it would be sort of wrong if I didn't at least mention her in my videogame blog considering she is a part of all my videogame memories.

1. Podtoid 100 was a complete clusterfuck. For those of you that missed it don't worry, it wasn't worth it. Nothing really interesting or funny happened. To tell you the truth, if it wasn't for Dangerzone I would say it was a complete waste of time. Alright, there was one thing that made it worthwhile. Which leads me to........

2. Some of the Podtoid crew think the Linde Ocarina of time Fiasco was the best moment of podtoid, which means I can die happy since it was my question that sparked that debate. Now I just need to figure out a way to make the whole Boner Quest predicament worse and I have succeeded in my dream of making Linde miserable! HAHA!

3. I remain adamant that Jim needs to sing DangerZone on podtoid.

4. Apparently Yojimbo has discovered how much I like using the word Apparently.

5. Unstoppable Juggernaut likes the Red Faction demo. HAHA! take that Blehman and Yojimbo! We are united in our enjoyment of bad demos!

6. That I am really fucking tired of movies with Will Ferrell in them.

7. That I can't decide on whether or not the Bionic Commando multiplayer demo is any good. On one hand, the whole grappling hook thing works surprisingly well and it is really fun to latch onto enemies and beat an enemy down with a combination of the grappling hook and a melee attack. On the other hand, it is a pain in the ass to aim in it. You can go into a zoom in mode for more accuracy but it slows you down and considering how fast everybody is moving with the damn grappling hooks you will be lucky to hit anybody zoomed in.

8. The smoke grenade in Gears 2 is unbelievably overpowered. I never realized how broken that fucking thing was until I dug out Gears 2 for something to do until the next game I am interested in comes out. Originally I thought the whole knockdown thing was a good idea because it got people to clear out an area in Annex and King of the Hill but then I realized that the existence of the ink grenade makes it completely redundant. Christ, nobody uses the smoke grenade as, well, a bloody smoke grenade anymore. People just use it to make killing people with the shotgun easier. The person who came up with that idea needs to be fired.

9. I'm actually excited for Bioshock 2 now. I really didn't expect much out of it but it is actually looking really good. It probably won't be anything revolutionary but it seems like it will be at least worth a playthrough.

Also where is my damn Failcast badge in the forums?!
#Community
Login to vote this up!