6:22 PM on 05.02.2009 (server time)    0
So, the other day I randomly decided I needed some new retro games to play, and I got a little carried away on Amazon. The games have been pouring in over the last few days, and every day has been like Christmas. Today the final game got here, so I decided I would take pictures and show yall what I will be doing for the next few weeks. 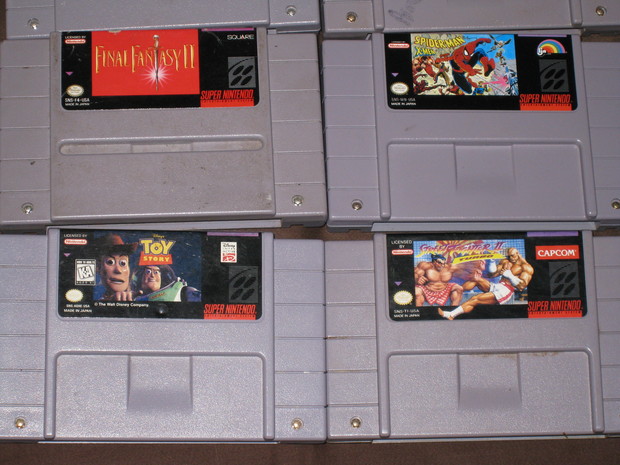 Somewhere in California, Naia just came. I have to be honest, I never played FFII until they rereleased it on the Loading Time Extravaganza PSX version. Owning the SNES version means I own FFII-FFXII, and all I need is the original NES game to complete the collection. Though I think I'm going to have to hold off starting a new FFII game until I finish my current playthrough of FFIII (I'm currently grinding Gau before I go to the Floating Continent).

I know, this game really isn't that good, but it's one of my childhood SNES games, which means I have an odd obsession to own it. It was hard as balls when I was young, it is hard as balls now. The Game Genie and this game will be meeting soon.

Like a lot of licensed games during the 8-bit and 16-bit era, Toy Story is not bad. It's a solid platforming game with very nice graphics, and while it doesn't do anything amazingly, I always rented it as a kid but never beat it. This will be remedied.

I know there's a hundred versions of this game, I own 2 of them on XBLA. So why would I buy another copy of this game? Because it was one of the two first games I ever owned for SNES (The other one being Super Mario World obviously), so it holds a special place in my heart.

There ya have it folks. Now if you will excuse me, I have some SNES to play.
#Community
Login to vote this up!