Oh, and there's a musical number in the middle of the film where the totalitarian government enforces mandatory choreographed exercise for all US citizens at 4pm every day. 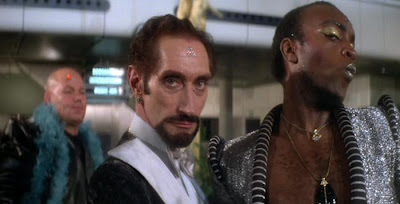 The Apple was produced by the same company that made all the Death Wish films, Superman IV, and Masters of the Universe. Prelude to some hot man-lovin.

There's more glitter on men in this film than if every man in America kept a copy of Mariah Carey's movie in their pants.

On the upside, it's really fucking horrible and could be used in torture of unwilling prisoners of the US.

I watch it so you don't have to.

11 out of 10 disco balls.
#Community    #NOTvideogamesrelated
Login to vote this up!