Why Do Games Sell: The Metascore Effect (TL;DR)

7:27 PM on 04.27.2009 (server time)    0
[Author's Note: I have always loved statistics. It was one of the few high school subjects I found interest in, and recently I thought it would be interesting to apply it to videogames, to see if there is actually a mathematical link to the success of videogames. I'm not trying to be Michael Pachter, I can't look at Hardware sales and predict that the Nintendo Playbox is coming out in 2011. This is just purely a statistical data analysis.]

Review scores and game sales are the two authoritative ways of telling if a videogame is successful, though they serve two different actors in the industry. Review scores are the consumer�s benchmark as to how good a game is, and sales numbers are the developers/producers telltale sign of success. But how well do these numbers line up with each other? I wanted to see if Metacritic scores could be used to predict how well a title will sell.

I used the same data as I will be using for all of these analyses, which is the Top 10 Software Sales by the NPD Group, covering 12 months, from April 2008 through March 2009. 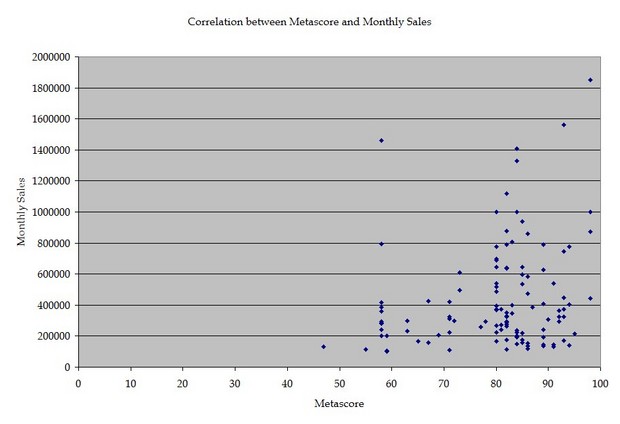 To do this I made an XY-scatter plot (Figure 1) with the Metacritic scores as the independent value and the sales numbers as the dependent value. No matter what type of trend line is used (linear, logarithmic, exponential, polynomial), the R-Squared value never goes above a 0.16, with a 0.00 meaning absolutely no correlation and a 1.00 meaning a 100% positive correlation. This means that there is just the slightest correlation between Metacritic scores and sales numbers. The correlation would be a bit higher if the biggest outlier, Wii Play, was eliminated from the data series. Even though Wii Play has one of the lowest Metascores in the data set, a 58, it continues to sell like crazy since a Wii Remote is included with it. However, since it is still included in the NPD software data, it must be considered.

I believe it is worth it to look at a few of the other outliers and see what makes them unique. One of the biggest tragedies in the industry this past year was the underperformance of Little Big Planet. Despite a Metascore of 95, the second highest review score in the data series, it sold a disheartening 215,000 copies in the month of its release, October, and did not sell well enough to be in the Top 10 after that. The reasons for this? A combination of being a PlayStation 3 exclusive, being released late into the month, being a new IP, and being released on one of the busiest months of the year.

On the other side of the spectrum, it is odd to see that Iron Man and Lord of the Rings: Conquest, having a 47 and 55 respectively, do as well as they did. This is not to say that they did well relative to the other games, but to even break into the Top 10 for their respective months is surprising. It seems like they have everything going against them; they are bad games that are not on Nintendo systems, they�re non-exclusives, and they�re both new IP�s. So how did these games sell over 100,000 each? Well, firstly, the systems that they got on the charts with have huge install bases (PlayStation 2 for Iron Man, Xbox 360 for Lord of the Rings: Conquest). Secondly, they both were rated T by the ESRB, so they weren�t limited to a certain age demographic. Iron Man came hot off the heels of the blockbuster success of the film it was adapted from, and Lord of the Rings has continued to be a brand name that sells products, regardless of the fact that the last LOTR movie was released back in 2003. Finally, a note of interest is that during the months that they broke into the Top 10 (May 2008 for Iron Man, January 2009 for LOTR: Conquest), there was only one other game in the Top 10 that month that was a new release, so they didn�t have as much competition.

When looking at data like this, however, one must keep in mind that correlation and causation are two different things. Two pieces of data such as Metacritic scores and sales numbers can be related without one directly causing the other. For example, Grand Theft Auto IV was the best selling game of the past year, and has the highest Metascore of all Xbox 360 and PlayStation 3 games. But did GTA IV sell so well because of how good it was? This seems like an obvious observation, but the game sold a combined 2.850,000 copies in just two days, which didn�t leave a lot of time for consumers to read multiple reviews and make a purchase decision based on them. The likely scenario is that Grand Theft Auto IV sold so much for the same reason as it got such good reviews, because of the hype and anticipation of the title. Not to say that GTA IV wasn�t deserving of its rave reviews, but they are likely not the cause of its sales.

Though there is no concrete correlation, one can see a definite slope in the scatter plot. Barring Wii Play, no game that got under a 60 on Metacritic broke the 250,000 units mark, and (again, not considering Wii Play) no game that received under an 80 sold 1,000,000 units. This shows that a videogame has to be good to sell exceptionally well, but just because a videogame is good does not necessarily mean it will sell exceptionally well.

In summary, there is a tiny correlation between Metacritic scores and sales numbers, but it is negligible and does not mean that the scores are the cause of the sells. Just because a game scores well does not mean it will sell well (Little Big Planet), just as a poorly reviewed game can do somewhat well (Iron Man & Lord of the Rings: Conquest). However, the games that sell the most are excellent games (Grand Theft Auto IV). The only exceptions to this are very rare and special cases (Wii Play).

In my next part of the series, I will take a look at the correlation of ESRB ratings and sales numbers.
#Community
Login to vote this up!