DSi? I picked up a different portable instead.

12:23 PM on 04.20.2009 (server time)    0
Well, this past weekend I got the chance to go and visit a few friends of mine at a gaming store called Digital Press. At the end of every month, they host a get together/mini party which features tournaments, snacks, and such. One of the really cool aspects is that the owner of the store allows people to come in with their stuff to trade or sell to other people who come in that day. He makes no money off of this, but allows it anyway.

That's how fucking awesome this store and the owner are.

I stopped in this past Saturday during the meeting to see if anyone was selling anything interesting. A friend of mine who I see at the store was selling a Neo Geo Pocket Color, in perfect conidition, with five games, an AC adapter, and a small case he was using to store it. All this....for $35. I bought it in a heartbeat. 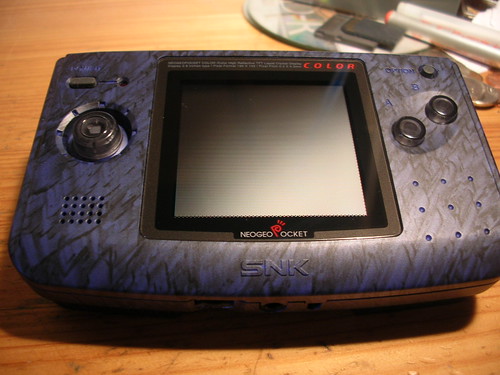 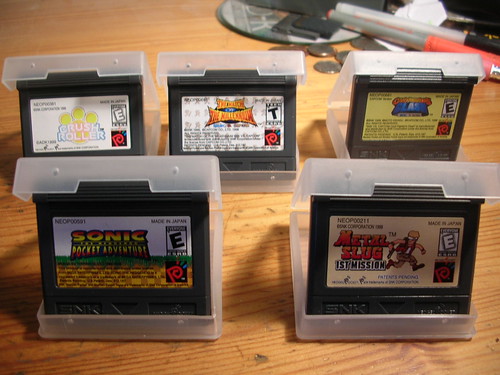 And here are the games, they each came in their own case.

Metal Slug is Metal Slug, except with the addition of a lifebar, when that empties out, it's a game over. So technically, you have one life per continue. This makes it a bit challenging, which is nice.

Capcom vs. SNK Cardfighters Clash is surprisingly good. I don't usually play CCG's much, let alone on a console. The system is pretty straightforward and simple, which is probably why I like it, not to mention that it's got Capcom and SNK characters. That doesn't exactly hurt it either.

Capcom vs. SNK: The Match of The Millennium is everything you'd want in a handheld fighter. Everything is really well balanced, and challenging. When you consider that there's also around 12 minigames inside, and that it can hook up to the Dreamcast for added content, you start to realize how amazing this game is.

Sonic the Hedgehog Pocket Adventure is...alright. I've never been too big of a Sonic fan growing up, but I already spent quite a bit of time on this one, and I'm really enjoying it. There are some pretty annoying parts, but nothing that makes me want to stop playing it.

And last but not least, Crush Roller, the only game that needs an explanation. You play as a ball of paint who needs to run over the entire floorspace of a maze/floor while being chased by two other blobs. Most of the time they're faster than you, so you need to lead them into crushers o you can get about 10 seconds without them so you can go and paint more of the floor. Oh, and once they're crshed, they come back faster and smarter.

Overall, I'm incredibly happy with my NGPC so far. This little machine is great, and it's a shame that it received such little attention and ultimately died out.


Also, I got these in NYC a few weeks ago at Toy Tokyo, figured I'd share them here. Two Dragon Quest bottlecaps and a magnet from....some anime series. I just thought he looked cool, so I got him for a dollar. 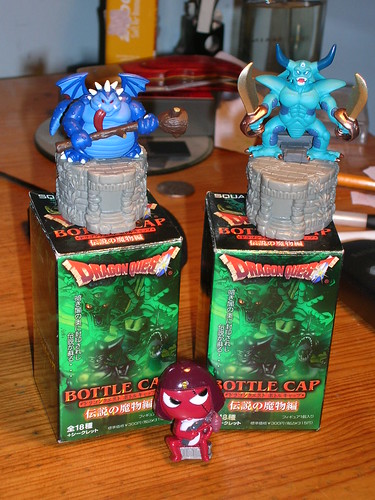