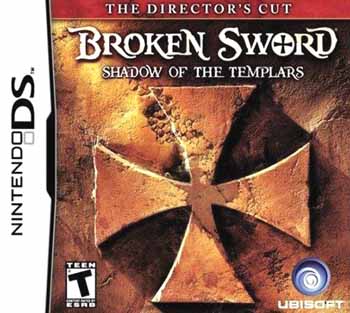 The Broken Sword series used to be a massively popular point and click adventure released on the PC in the 90's before the genre slowly died out. Various ports, updates and sequels have been made over the years on the Game Boy Advance, Palm OS and the Playstation. And now the original game Shadow of the Templars has been updated for the Wii and the DS.

You take control of George Stobbart, an American touring Europe on his summer vacation when the café he’s drinking in is blown up by a suspicious clown. After dusting himself off and meeting Nico Collard, a French photo-journalist who explains to him that not all is what it seems with the bombing of the café, George sets off on a European tour trying to solve who is responsible for nearly killing him.

The developers have added a prologue to the game where you get to play as Nico Collard, who is investigating a murder of a rich Parisian who seems to be linked to her father. Her investigations lead her to the bombed café and meeting George, teaming up with him in order to solve the mystery. I like the addition of adding a quest to Nico, it gives her appearance in the main quest a bit more purpose. For those of you don't remember the first game, she just spends most of it sat in her apartment room and I for one never really worked out her importance.

The other changes are mostly cosmetic, they have removed the blood in several of the cuts scenes that feature it, and parts of the game have been shortened down or removed all together in order to streamline the game, of the segments removed, most interestingly they have removed the sections of the game that can end in death, if the player doesn’t react in time or make the correct decision, it seems like a strange choice to remove it because normally it’s quite clear what the player has to do.

The game is really well written and the story is interesting enough to keep you hooked for the game 10hr playtime. The hundreds of characters that you’ll interact with throughout the game have enough speech options to ensure that they won’t be repeating themselves and you’ll want to speak to every character to find out as much as you can about the story, on a negative note some of the characters speech can get a bit juvenile, normally where the writers have attempted to inject humor into the story. Georges’ speech can also seem quite immature when he’s (attempting) to flirt with Nico and the conversations just resort to sexual references.

Using the stylus to control George around the games settings work surprisingly well, you click where you want him to walk and he and if you want to investigate something the game indicates what can be interacted with when you pass touch something with the stylus. A few of the touch screen puzzles that they’ve added do seem to feel quite sluggish and unresponsive at times, however there are only a few of these touchscreen puzzles and the rest of the time the interface lends itself well to the point and click game.

The graphics are all hand drawn, including redrawn facial expressions drawn by Dave Gibbons (the artist of Watchmen) and really act as throwback to the era before hand drawn animation made way for the computer generated kind. The backgrounds all leap off the screen, they are all colorful and they look individual. The cuts scenes that have been included in the game were all present in the original, they haven’t however been updated at all and as such manage to look dated and out of place in a great looking game.

If they go ahead and port a couple of the other Broken Sword games to the DS, I hope they decide to step back and improve some of the dialogue and really work on the touchscreen puzzle elements of the game and not just give it a mild graphical update. I wonder if this is going to be the start of a renascence of the genre, or are we going to see remakes of the classic point and click adventures of the ‘90s (Beneath a Steel Sky, Sam & Max Hit the Road, Monkey Island)? The system certainly seems made for the genre, I’d happily purchase a DS port of Day of Tentacle or Sam and Max but for now this Broken Sword will suffice as a nostalgic trip down memory lane.
#Community    #reviews
Login to vote this up!

My names Nik, I've been meaning to start to fill out this page for a long, long time but now I'm finally getting round to doing it. Anyway about me I’m 24 and live just outside London, I’ve played games all my life and owned most of the major consoles but it was Final Fantasy 7 that turned me into a gamer. Favorite games include FF7, Super Mario 3, Fable 2 Sonic and Knuckles, The Orange Box, Gears of War 2, Resident Evil 4 and other such games most of which are sequels, why is that?

I’m also a pretty big reader with Snow Crash, World War Z and Survivor being some of my favs. More recently I’ve gotten into comics in a big way I’m reading 100 bullets, DMZ, Invincible, Hellboy, The Umbrella Academy, Walking Dead and Scott Pilgrim at the moment. Always up for hearing some recommendations for new books to pick up.

I studied film at University and I've always been really into cinema, I could go on and list hundreds of flicks that I love but here's a few: (500) Days of Summer, Swingers, Dark Knight, Cloverfield, Iron Man, Top Gun, CONfidence, Bubba Ho Tep, Army of Darkness, Shaun of the Dead, Battle Royale, Anchorman and Heat being a few of my favs. I also make a point of going to see every game adapatation at the cinema (that's released anyway), I don't know why, maybe I just go in the hope that one day, one film will get it right.