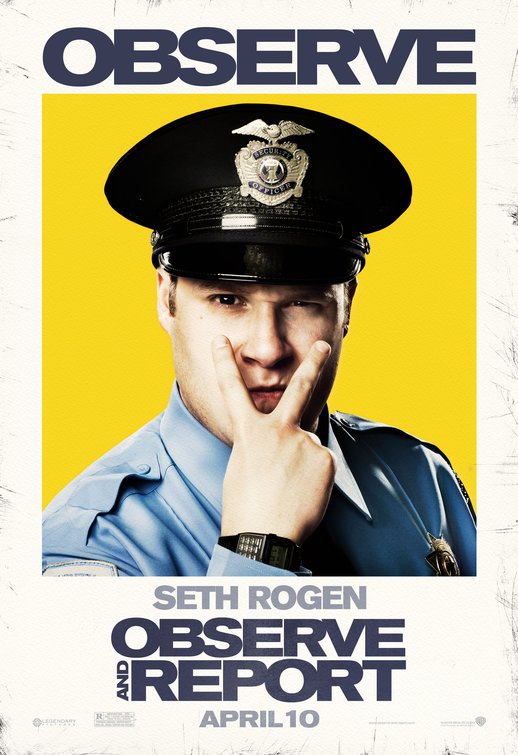 A bi-polar, delusional and mentally unstable young man lives with his alcoholic mother while working as a security guard in a mall. He becomes obsessed with the apprehension of a flasher who is terrorizing the mall and becomes convinced that the cops are working against him. He is obsessively infatuated with a girl who is a drug addict and uses him. Things turn violent and depressing as he stops taking his meds and teeters on the brink of insanity trying to become the hero he so desperately thinks he should be. Doesn't really sound like a comedy does it?

That is the plot of Observe and Report a comedy so dark it makes Heathers look like Mean Girls and Mean Girls look like a Disney Cartoon. Good comedy often walks the line between darkness and humor, but Observe and Report is like a drunkard who has just been pulled over by the cops and can't stop teetering back and forth between the two. It isn't that it makes it a terrible movie, just a film without a center.

Seth Rogen plays Ronnie Barnhardt, the bi-polar mall guard mentioned above, as he wobbles between believing his mall security guard job makes him the protector of the world and manic depression. Scenes flare from gross out humor to seriously dark and disturbing stuff, like a truly bloody and horrific fight when Barnhardt gets mugged. It might have all worked if every dark scene wasn't some how interrupted by the equivalent of a fart noise. It's as if director Jody Hill got scared every time something got too dramatic and decided that he'd enjoy ruining the dark comedy with a lighthearted joke.

You can't always have your cake and eat it too. A serious lack of commitment to the soul of the movie is missing from all of it. It doesn't help that no one told Rogen which scenes were dark and which were light. Sometimes he's spot on for the dark scenes while discussing the merits of tazering someone and other times he's doing "fake comedy crying" in a scene that should be dark. It just adds another layer of confusion to an already overly odd movie. It doesn't help either that the usually hilarious Anna Farris, as Barnhardt's evil love interest, totally phones it in and doesn't seem to realize she is in a dark comedy either.

In fact the only one who seems to have gotten the memo is the tragically underutilized Ray Liota, who plays the officer called in on the case and Barnhardt's subsequent enemy. At least Liota has the presence of mind to be serious when it is required and be a joke when it isn't. If this film is a sign of Rogen's ability to grasp a more serious role let us hope he stays stuck as a stoner until he gains a bit more acting experience in the dramatic.

All this being said, and it is a lot, if you get past the immensely awkward fact that the film has no clue what it is doing (seriously, it's like a teenager who just grew two feet in six months) there's some comic gems in there. You will definitely laugh here, it's just the humor is bogged down by how immensely out of place part of the film and I'm not sure if it's the darker side or the lighter side that doesn't fit in. It's like there's a really great dark comedy in there desperately trying to get out, but it can't because fart jokes make more money.

(From Examiner.com, which you should click on so I get moneys)
#Community
Login to vote this up!