That One Mook: Visions

6:17 AM on 04.05.2009 (server time)    0
I've faced many asshole bosses in my days. I've been a gamer for a good 90% of my 28 years alive. Started off with Colecovision as a youngin and I'm still going strong to this day.
I've taken them all down. Ganon, Bowser, Robotnik, Kefka, Shang Tsung, Lavos...the list can go on for days, but I don't remember most of the actual names. Old age I guess.
There was one foe that crushed my soul. Made me more frustrated than any other and it's name is "Visions" from Rock Band 2. Granted, this isn't the final "boss" of the game, but it's at least a main boss, maybe even a Goro type son of a bitch that's harder than the final boss.
It all started innocently enough. I'm not the best Rock Band/Guitar Hero player in the world, but I can hold my own on Hard and I'm about halfway there on Expert. I've gotten my fair share of Gold Star songs, I download every new song I can and my gamerscore isn't too shabby either.
So I sat down to play me some Endless Setlist on Hard. Just went wee wee, so I was going for Steel Bladder as well. I figured I was doing pretty well in the game. I didn't play every single song yet, but this would be a great way to do so. Take em all down in one shot. A few hours pass and I'm doing awesome. 5 stars on everything so far. A few toughies are coming up. 4 stars on Shackler's Revenge. 4 Stars on Get Clean. It's ok, I didn't expect 5 stars on everything. The end is coming and only a few songs left. A new song starts up. "Visions" by the band Abnormality.
Keep in mind to this point I haven't failed anything, I haven't paused, I haven't passed off the guitar. It's been me and Rock Band 2. Alone. Intimate. But I didnt' know what was coming. I've heard some horror stories about this song, but I didn't know what it was. But hey, I can hold my own, I mean, it's only on HARD, right? It's not Expert or anything. Plus hell, Painkiller is supposed to be the "final" song and I already got a 3 star on that a few setlists back.
I failed the fucking song at 9%.
I was unprepared for the torrent of notes that I saw before me. I was amazed that this was on Hard difficulty. I had to double check I was playing Rock Band 2 and not Guitar Hero III (zing). Alas, my fears came true. Hours into my bid for Steel Bladder and my dreams of that achievement were dashed with this song. I couldn't give up though. My hands ached, but I could still get this setlist completed. Steel Bladder isn't that big of a deal anyways, but I'll be damned if I came this far to fail out and stop.
For two hours I kept playing Visions. Over and over and over again. I was subjected to the mindless noise that is this god forsaken song and after two hours, I felt defeated. I though, "one more go" and I honestly believed I could do it. I felt like I was getting the rhythm somewhat down. The strumming was akward, but I knew I could do it. I had to try. I had to give it my best shot. I mustered up all of my might and strength and gave it one final shot.
I failed at 16%. Sadly, that was the best I'd done in those 2 hours.
16%.
Sixteen.
One six.
What in the hell...

My hopes for conquering the Endless Setlist were gone. My pride had been raped on the pinball table called Visions. I couldn't do it. I just could not conquer that song.
Many months would pass. I never dared try the Endless setlist again. No, not until I could conquer the beast that was Visions. I would try the song every time I played Rock Band 2. Whether it was for a half hour to play my new DLC or a 3 hour marathon session with friends. My best score to date was 18%. I had friends who claimed they were pros try it and watched them fail in a barrage of curses and tears...well, maybe not the tears, but there was plenty of profanity. This inhuman song could not be conquered. I was giving up hope on ever taking down the Endless Setlist. I mean, I could do it on Medium, but that's kinda gay. A real Rock Band player would at LEAST have it on Hard, right? I could even 100% the damn song on Medium, which makes that 18% on Hard a real kick in the balls.

March 23, 3009.
I just watched my little sister play her custom setlist of Panic at the Disco, Weezer and Hollywood Undead. She was done but I told her to try Visions. I laughed as she failed it on Medium. I asked her if she wanted to see how hard it was on Hard and she obliged.
I fired up the song...played....failed.
21%.
What was this? 21? I hit the twentys?? I tried again, but only came up with 19%. Still better than my previous record of 18%, that's for sure. One more try, for shits and giggles.
I start the song, hit all 3 star power phrases in that beginning section and then the time change hits and I'm still in the green. I'm just going crazy on that strum bar. I dip halfway down and realize I should use that Star Power. I tilt back and just keep hammering away on the guitar.
All of a sudden the notes slow down. I made it to a point in the song I've never experienced before...the easy section. I'm going to town, hitting every single note I could because I've seen videos of the song online. I know the middle is the easy part, but it WILL get hard again. It WILL destroy me again. It WILL make me cry and curse and throw my guitar at my cat and/or sister in a violent rage.
I am perfect so far in this section. I'm hoarding every single bit of Star Power that I can. I'll be damned if I use it here because I know I'll need to save it.
The song picks back up again and my hands are hurting. I'm playing this game like I've never played it before, like a man possessed. A possessed man who is still barely hitting any notes, but he's hitting just enough.
I use that star power I'd saved up and I don't relent. Then it happened... 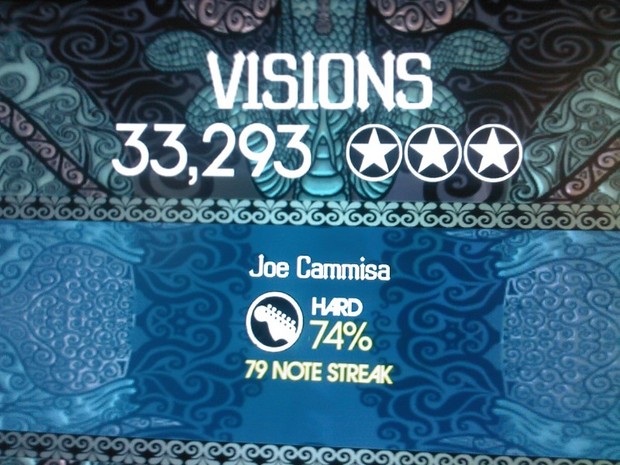 The beast was slain. I was in the red to finish the song, but goddammit I finished the song!
I HAD DEFEATED VISIONS! I BEAT VISIONS!!
Two weeks later and I still can't believe that I'm typing those words. I BEAT VISIONS...ON HARD.
As a matter of fact, I actually beat it a SECOND TIME a few days later and improved my score to over 39,000. Still 3 stars, but shit, I BEAT VISIONS.
I sat there, mouth wide open. I sit there for a good 2 minutes and my sister asks if I'm ok.
At the top of my lungs I proclaim, "HOLY SHIT, I BEAT THAT FUCKING SONG!!! I ACTUALLY BEAT THAT FUCKING SONG!!!!!"
My sister was quite surprised as I do my best to keep my language clean around her since she's my little sister and all, but I couldn't hold back. I jumped up and down, cheering. I took that picture with my cell phone and sent it to everybody I could. I even posted threads on messageboards I visit just to proclaim that I had finally beaten that song.
The rush I felt when I finally conquered that song was the biggest rush I had in gaming in years. Bigger than when I beat Gitaroo Man, bigger than when I finished Final Fantasy VII, and dammit, I felt more proud in that moment than I did standing at the altar ready to marry my wife. It was a feeling I'll never forget and a sensation I still can't believe I can experience.
My next goal? To finally complete the Endless Setlist...
#Community
Login to vote this up!