I ACCEPT YOUR CHALLENGE YA DOUCHE!

10:08 PM on 03.27.2009 (server time)    0
Well, I can't remember as far back as my first gaming experience in a wider sense of the word, so I'll restrict it to the realm of video games instead, which I do remember, and quite clearly compared to other memories I should have. So anyway, my first experience with a videogame ever was on the PS1, the game: Speed Racer. 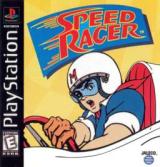 Now I touched on this in my intro blog, but anyway, I might be able to expand on that now. I was 6 or 7 years old, and it was Christmas. I sort of had an idea of what I might get: a HotWheels playset, an action figure of the Power Rangers (when they were cool, Wild Force was the beginning of the end), things like that. What I didn't expect was this suspicious, large looking box that was addressed to me. "I have already opened my HotWheels set, what could this possibly be?" I thought. I hadn't asked for anything else of that size, so I was baffled.

Then I opened it to the huge glorious box of a new PS1 with the Speed Racer game bundled with it. Now at this time I had only been very mildly exposed to videogames via a N64 at a friends house (and never really played, just watched), so when I saw this contraption I wasn't very sure what it was. And when I was told it was "kinda like a N64, but not quite" I have to admit I was slightly disappointed. But when I hooked it up to my dad's TV, all that went away.

I was playing Speed Racer on my dad's tv. I was Speed Racer. Holy shit, my mind was blown. Looking back, the game was substandard really (3 tracks, the 2nd an extension of the first and the 3rd an extension of the second) but at that point I didn't care. I was driving the fucking Mach 5 and loving every moment of it. Oh look, a short cut: "press the A button on the on screen steering wheel, will it... holy crap it jumped just like on the tv show!" I had a blast with that game, and it is still loved dearly despite all its faults. Because honestly, you never forget your first.

Now I'm nostalgic and will look for this game among my things and replay it for nostalgia's sake. Ahhh, my childhood.

How was that unstoppablejuggernaut? :P
#Community
Login to vote this up!