Mirror’s Edge is game I really wanted to like from the very first time I saw it. I’m a huge sucker for games that try new things or adapt certain mechanics for unconventional means. A first-person action platformer, a genre traditionally reserved for third person games (and arguably rarely done well anymore), is one such type of mechanic/perspective switch that interests me to no end by default. Luckily the game didn’t disappoint me in the grand scheme of things.

The key to ME (fuck yeah I abbreviate shit) working for me was always going to be the controls and the fluidity of the action. I feel the results were sort of mixed. The controls on one hand were as simple as pie to wrap my head around. They became second nature within an hour or so. However, the actual game’s fluidity was archaic at best. 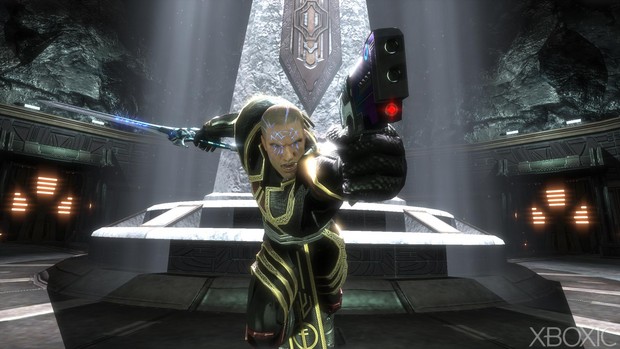 If only you could actually wield both at once, maybe they would have given us a traditional control scheme.

The graphics were decent, despite Silicon Knights’ hatred of the Unreal engine. The in-game graphics weren’t stunning but they got the job done. You were often running around with a giant hammer smacking shit in the face. How gorgeous does it need to be (and it was gorgeous artistically speaking)? However, the use of the in-game engine for the cut scenes showed how powerful the engine could be. I was often taken aback by the fidelity of the cut scenes. I drew the conclusion the engine was great for a game… just not this one. The camera would need to be closer to the character to show off the graphics, which TH didn’t do.

Sadly the game’s creators were so assured the game would “change the way we play games” and that it would warrant a number of sequels that they didn’t bother tying the game’s narrative threads together by the end, instead leaving it open to the sequels that at this point will likely never see the light of day. That’s sad because the best part of the whole story was the last series of cut scenes setting up the coming action. Sigh.

Up next will be Mercenaries 2 and Ratchet & Clank Future: Tools of Destruction. Stay tuned.


**All images provided by/found via Google Image Search.**
#Community
Login to vote this up!