2009 and lanpartys are still fun

For a couple of weeks now we (with "we" I mean me and some friends), have been making a lanparty every couple of days.
I can remember the times of the lanpartys, it seems like ages ago, but it has only been like four or five years. At first we were a group of guys here in Uruguay only united by our passion for playing multiplayer, then the Lanparty.uy forum was created with the objective of making a 100 PC�s lan a reality in the country. And they succeeded.
So what drove me away from massive lanparty�s? It was that it looked like they droped on schedule with exams, they lasted a weekend and you would end up in a creepy state not far in the evolutionary line from a zerling.
And then the internet on broadband came and is far more easy to play from home without moving the PC, and lately is STEAM and more STEAM powering my online PC gaming.

So it was a while since my last LAN.
The problem is, most of my friends dont share my love for the videogames. In fact I dont have any close friends with STEAM, or with a gaming capable PC. So the other day I found my brother and one of them trying to establish a LAN at home to play Age Of empires 2 (yeah, I know...). So I decided to take the lead and at least install Warcraft 3 since is a game that plays well on the laptops or even netbooks.
It was a fast setup, nowadays with wifi, laptops playing an old game is fairly easy. So is easy to install and easy to get everyone out and go to sleep. 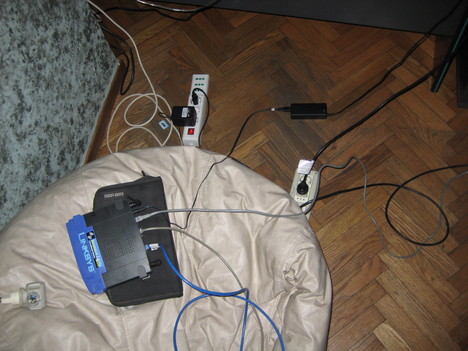 I know it seems complicated, but that is only three UTP cables and one is for the internet, all the other PC�s where connected over a wifi.

I dont have photos of all the food we ate or the drinks, a shame...
#Community    #PC
Login to vote this up!