9:41 AM on 03.01.2009 (server time)    0
My buddy power-glove made a post earlier today about a new monthy c-blog topic called Monthly Lulz. While some people seemed to think it wasn't a great idea, it kind of inspired me a little bit. So, I thought I would make a post about the strange transformation that occurred to one of my favorite video game heroines between game sequel: Yuna.

Apparently Yuna's lonely days after the defeat of sin were not easy. Friends went their separate ways, and Yuna bore the pain by becoming an internation pop star...and whoring herself out. You think I'm exaggerating? Check out her Sailor Moon-inspired striptease at the beginning of the game. In front of thousands of people no less.

So anyway, on to my WTF breakdown. 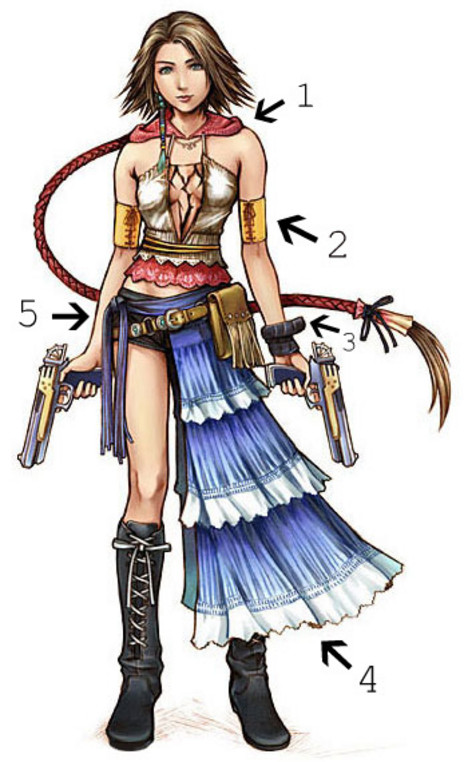 This doesn't seem so bad at first glance, right? WRONG. Just because you are a girl who is hot and has nice boobies doesn't mean you can take a pair of scissors, cut up all of your clothing and wear the fashion Frankenstein outfit.

Look, I like a hooded shirt just as much as the next person. But I can't for the life of me figure out why you would put a hood on a...well, let's just call it a halter top. Why would you even need a hooded halter top? I mean, if you're wearing a top that skimpy, it's probably pretty warm out. The hood doesn't seem to be very functional. Especially with that crazy rat-tail hair extension thing going on. I mean, is there a hole in it for the wrap to go through, or does it just stick out the side? Oh wait, I get it now. The hood is there so Yuna can coil up the rat tail and hide it after hours of harassment from school children, all asking if they can have "just one more game of jump rope."

First off, how do you even lace that thing onto your arm? You'd have to get someone else to do it or else risk looking like a retarded dinosaur. I can't really see what purpose this has for Yuna. I mean, for a big burly man it would serve as a great pick up line: "Why do you wear a gauntlet on your bicep?" "Why, too keep people from getting to the gun show for free." Or something like that. They don't even look particularly durable. If I was to stab and/or shoot Yuna in the arm, I bet it wouldn't provide much protection. However, it would make a pretty good tourniquet...oh my god. Yuna's a fucking junkie. Well, I guess that explains half of the outfit right there.

What the fuck is this? I have no idea what this is.

I want to know who thought this shit up. Who looks at a skirt and says "Yeah that's cool. But you know what would be better? CUTTING IT IN HALF!" Cutting the skirt in half doesn't make it more efficient, in fact it becomes more cumbersome than ever. That shit will get caught in every automatic door around. The only reason for having half of a skirt is if Yuna had some sort of horrible childhood scar on the outside of her left thigh. That must be it; even her Songstress outfit has a half-skirt on the left side. Should have been wearing those gauntlets on her thighs I guess.

For those who don't know, "spanky panties" are what cheerleaders normally wear under their skirts. They're comfortable with A LOT of coverage so that football players and fans won't get more of a show than they paid for. Here, it seems like Yuna ran out of money. I mean, those boots must have been fucking expensive. Or maybe she's trying to make up for having too much cloth on one side of her outfit. I think maybe drunk one night, she took the line "Show us some leg" a little bit more seriously than she should have.

So there you have it. Yuna's clothing was either super expensive designer stuff, or else a misfit of re-sewn garments from various other outfits. In either case, what was she thinking?
#Community
Login to vote this up!