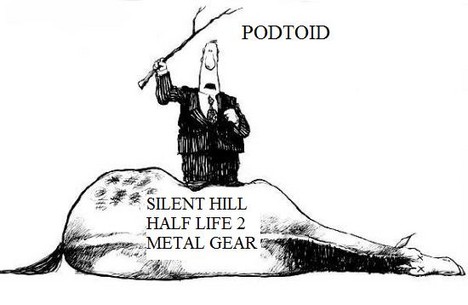 This should be the podtoid's new header :P

I don't really have anything to say before hand so let's just get right into it shall we?

2. Unstoppable Juggernaut is the master of the Left4Dead's

3.That I actually want to play FEAR2 now. I finally played the demo in addition to reading Jim's review and it actually looks promising. Which is saying something since I wasn't looking forward to it at all and I didn't think the original FEAR was all that great. It was okay, but not as good as I hoped. That, and the game actually seems scary, something that I didn't think the original was.

4. That Podtoid doesn't know how to do a Resident Evil podcast. I find it funny that it was supposed to be about Resident Evil and only 1/4 of it was about Resident Evil. If anything it was about flower and I find it funny that even when they tried to talk about it they ended up talking about Silent Hill. And I find it a bit, well, stupid that they made a podcast about a videogame series the majority of the cast didn't even care about. The only person that seemed to like the series as a whole was Nick Chester and when they tried talking about the games before 4 the conversation didn't really go anywhere. Wouldn't it have made more sense if they waited until Jim Sterling was available, somebody who actually seems to care about the series?

It's just, christ, Why make a podcast about a videogame series most of the cast doesn't even like? It doesn't make any bloody sense. That's like me writing a blog about Halo or Final Fantasy It is just......gah.....

5. That I am probably the only person that doesn't think that the Silent Hill games are scary. I realized, when listening to the recent Podtoid, that everything everybody thinks is scary is what made me think that Silent Hill is not scary. The radio that goes on whenever an enemy is nearby, the rows of locked doors, the enemy designs*, Etc. All those things I listed are things that prevented me from being scared in Silent Hill 2 and 3, yet those are always the things people bring up when they say how much the games scare them.

6. I likes me some C. Viper. Originally, I thought I would hate the character when I finally got my hands on SF4, but I actually really like playing as her. Probably because of the characters I have played with so far, she is the only character whose special moves I can pull off consistently with the 360's bullshit D-pad. I hope I get my SF4 gamepad soon.

7. Abel is a fucking bastard. I swear, Whenever I go up against him in arcade mode all he ever uses is that goddamn grab move. It's like the fucking AI for just that character is broken and that is the only move it can fucking use.

8. Colette was in Toyfare, which means I am going to have to make a trip to Borders sometime soon.

9. The figure that comes in the Street Fighter 4 Collector's Edition is quite lame.

10. Slow week in the Cblogs is slow

*This really only applies to 3 which had some unbelievably goofy looking enemies. One of which I started laughing at when I saw it. 2 actually had some good character design
#Community
Login to vote this up!