10:23 PM on 01.29.2009 (server time)    0
There is so much to tell to anyone who havent played Grim Fandango. First of all, it was a 1998 release if my memory doesnt fail me, I was... well, younger and on holidays. I managed to make my parents went for my desktop PC to the city and they brought it to my eager hands just for me to play Grim Fandango on my time during those holidays (Im not a sea and sun guy). 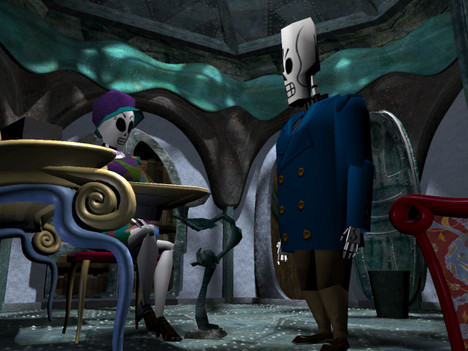 Back then this was considered great graphics.

The gameplay is interesting, you have only your character and the enviroment on screen, and control everything only using the keyboard. No more looking for pixels and combinations on the screen with a mouse. Everytime Manny is close of something of interest, his head will turn to it, then you can perform a "look" action by pressing E or interact with it by pressing ENTER, you have an inventory and thats it. In the era of the mouse and after playing so many adventure games with the SCUMM system I was a little worrried when I readed about this feature back then, but only after five minutes in the game I forgot about it and admited that it worked. Is inmersive and it serves the game, and not its 3d.

The main thing with this game is the story, is so good that it doesnt need a sequel. Its funny all the time and it bends incredible well with the puzzles. The setting helps, based on "El dia de los muertos" from the mexican folclore (the day of the deads), the level design fits everytime and tells the story as well as the funny dialogue.

You would think that such a great game would have had great sales. But it didnt, helping the statement that the graphic adventure genre was dead I think that was the end to Lucas Arts, at least so it seems on the graphic adventure genre since they give up on the genre. Still, I think anyone who played this game can recognize the overall quality it delivers. Great gameplay, great story, graphics and a cast of characters that I know I will remember forever.

Still if you try to play the game on Windows xp or Vista I dont think it will be a smooth ride. It wasnt for me. First you have to download what I think is the only patch ever released, it helps with the CPU clock speeds in a modern PC or so I read, it doesnt hur to have it. If you are lucky you will only need to set the compatibility mode for the executable on "windows 98 or ME". If you are not (like me), you will need to run the dxdiag program, disable direct3d and directdraw since depending on your graphic card it seems that nvidia doesnt take too much into account support for old games using directx7 on their drivers. In this aspect the game has not aged well, the people at Lucas Arts doesnt have a programmer to spare and make a re-release of the game compatible with the newer versions of windows. I know I would buy it again.

Still, Im playing and I feel nostalgic. Made more than 10 years ago this is an example of great story, character development and how to tell a good story. And still we have to live with so much crap in the game industry: usually the same generic stories but with better graphics.

Good ideas and good stories deserve better.
#Community
Login to vote this up!