10:59 PM on 01.24.2009 (server time)    0
So, a few months ago I started a blog series where I reviewed games I rent from GameFly. Unfortunately, working in the real world sucks and I find myself with little time to blog any more. I prefer to play games rather than write about them. It's why I'll never make a living at this. Oh well.

To catch up, I've reviewed all the games I've played since then and will post them in blocks of two (save for this instance, apparently), to catch up. Last time I wrote about Star Wars: The Force Unleashed and Quantum of Solace and before that was Dark Sector and Saint's Row 2, if you're interested. Without further ado, here it is...

I never finished the first Far Cry. I had it on PC and it kept crashing when I entered a certain room halfway through the game and I never bothered reinstalling it. Luckily, Far Cry 2 came out before I ever thought twice and now I have no need to ever go back and play the first. (I guess it also helps the game has NOTHING to do with the first after all the Crytek/Ubisoft legal bullshit that occurred, too.)

Given a different story (totally unrelated to the first, thank god), a host of playable characters (how much they each effect the game is unknown), and a HUGE unnamed African country to explore, Far Cry satiated my FPS hunger for quite some time. Let me repeat the coolest factor: the game world is HUGE. Something akin to 25 square miles or something like that. FUCKING HUGE, alright?

To go along with an entire country to explore, you get a beautiful engine that made me stop in awe multiple times and just enjoy a sunset or drive a Jeep (whose registered vehicles are throughout) alongside some zebras. That engine also allows for you to set fire to most of the scenery, too, something played up in the trailers. Unfortunately, when adding interaction to a game world such as fire, you bring to the forefront of the player’s mind not what you can interact with, but what you can’t, namely everything else. If I can burn a large swath of grasslands with a flamethrower, I’d also like my RPGs to do something to the grass huts, Ubisoft. Thanks. On that note, where were all the predators in the game world? The only animals were zebras, buffalo, goats, and chickens. I guess they wanted to avoid lion or gator poaching, but come on. Is zebra bowling (driving a Jeep into a herd as fast as possible and chasing the runners down) that much better? Didn’t think so. Gimme my lions, damn it. 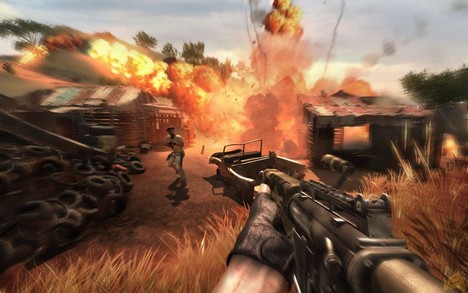 The worst part of the game was the respawning enemies at their bases all around the map. You’d knock off an entire camp and if you left the map region and came back it would already be refilled with enemies. Plus, constant patrols and instant-kill battering rams (aka cars) made avoiding fights preferable to engaging in them more often than not, which can kill the vibe of a shooter for some people. I dealt with it and accepted the constant barrage of attack as practice for the next big mission, despite the fact it got on my nerves some times.

All in all, Far Cry 2 is a phenomenal title that truly should be played by any FPS fan or adventure game fan in general. Traversing that much game world is just a neat feeling and really made me get lost in the experience. You should take the time to get lost, too.

Up next will be Left 4 Dead and Gears 2.