MMORPG: Is that all there is?

5:08 AM on 01.19.2009 (server time)    0
Recently I left the world of Azeroth, seemingly for good. Part of the reason I choose to leave was I assumed there would be another MMO on-par with WoW in terms of content and overall experience that I could begin to play…

Have you tried Final Fantasy XI recently? I downloaded the 14day trial thinking “how could a Final Fantasy game possibly be bad”. There were so many things I disliked about FF11, from that pointless piece of crap “play online viewer” to the pixelated 2003 graphics… I didn’t keep it for longer that an hour I admit, but it seemed so dated and bare and insignificant compared to the mighty mmo overlord, WoW.

Anyway, this isn’t about Final Fantasy XI in particular, but just about the sheer lack of great fantasy MMO’s compared to WoW… Sure, I’m sick of Azeroth, but I wouldn’t lower my standards or play a greatly inferior MMO for that simple fact. 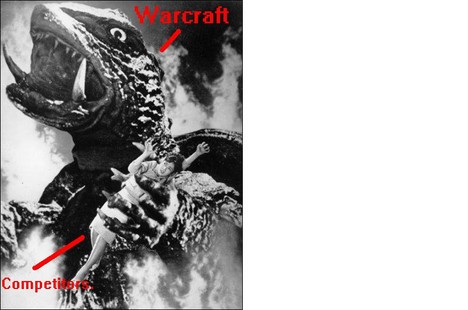 I have yet to try Warhammer, But I’ve read a lot of reviews and it really doesn’t seem to stack up against WoW. I may still give it a try, but I’m not too optimistic.

The more MMO’s I try, the more I’m realizing the greatness of WoW. That Blizzard really did make a spectacular game, far ahead of anything else on the market (or anything that would come out in the next few years, it seems)

It’s becoming clear that there’s really not a title out there that could compete against WoW for “best MMO” without being completely out of its league and ends up running home to its mother crying, with its trousers soaked in urine.


I guess if you take all the MMO’s out at the moment, and compare them to Warcraft….You could consider WoW the perfect MMO, I mean, if every MMO you can compare fails against WoW….Doesn’t that kinda make WoW the perfect MMO by default? (for now, at least)

So as 2009 begins, so do my hopes of a game that could compete against WoW. The most promising so far seems to be The Old Republic.

What are some promising MMO’s scheduled for a 2009 release on PC? Do you have your eye on any inparticular?

Your thoughts, give them to me.
#Community
Login to vote this up!