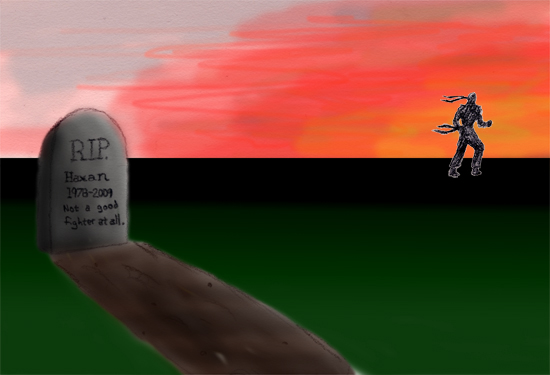 Before getting to the prize winners, I want to throw out a few honorary awards. If I weren't getting tossed out of my current place (damn roommates wanting their evil girlfriends to move in), and my living expenses were going to double in March, you'd all get prizes. But, since reality is a hard, cold mistress I hope my praise will do. So, without further rambling:

Longest Winning Streak (the person who spent the longest time at the top of the rankings):
senisan82

Most Hilarious Fighter (the person who cracked me up the most in battle):
Genki-JAM (Seriously, I would play any game with him. This guy could make Yaris fun!)

The Most Courageous (the person who joined the competition, yet had never played a Street Fighter game before last Tuesday):
cwal37 and NoLaw

Nicest Guy to Ever Kick Your Ass:
C2C Shiro


Which brings me to the prize winners.

First, there was The Attendance Award. This is awarded to the competitor who fought with the most theme characters on their respective days. There really wasn't much of a contest. The person who won this award missed only two days out of 17. Once was Christmas Day which wasn't surprising because I was barely online. The other night he was hosting a party. In addition to just fighting everyday, he was almost always the first person to throw down a challenge when I showed up online.

It gives me great pleasure to announce the winner of The Attendance Award to the soul of this contest:
Nilcam
Nilcam will be receiving an official Street Fighter Fight Night t-shirt from Capcom.com's online store. It's such a badass shirt, and I hope that he will wear it with pride!

Next we have the Cheapest Payer Award. This was an award initially created to encourage scrubbery and cheap tactics from all fighters. Since the Destructoid Community is made up of none but the most honorable gamers from around the world, I had to alter this one a good deal. I wrote c-blogs spotlighting the cheapest of the cheap, and in most cases I made up outlandish stories about some of our competitors. I then put it to a vote. The votes ended in a tie. So I flipped a coin to determine the winner.

The winner of The Cheapest Fighter Award goes to:
Genki-Jam
He will be receiving a prize that I'm still constructing. It should be completed this weekend. Hopefully, he'll throw up a c-blog when he receives it because it is coming along pretty sweet.

Since I hate to just leave it at that, I'm going to pick up a runner-up prize. This will go to:
Char Aznable
I'll be picking you up something awesome and cheap (to match your fighting style) off of eBay once I have your address. I've already got a few things in mind.

Finally, we have the moment you've all been waiting for: the awarding of The Grand Prize! This is for the competitor who had the highest score comprised of their total wins multiplied by their win ratio. And the winner is:
DanMartigan

DanMartigan managed to squeeze out a victory at the last second. It really was a photo finish. It all came down to 5 wins for him. Here are the final rankings, complete with the wins and losses, win percentages and overall points for the top ten contestants:

I truly wish to thank every single competitor for putting in as much time as they did to make this contest a huge success. This was an amazing experience for me to put on, and I hope you all enjoyed it. Congratulations to all of the winners!

Those who have won prizes, please PM me your addresses and I will get to sending/ordering/pre-ordering your prizes right away.
#Community
Login to vote this up!