A Time To Destroy: Substance 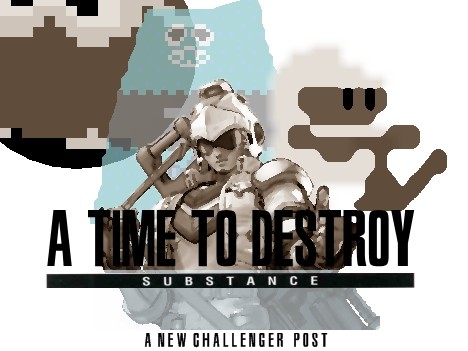 It all started with Dig Dug.

The primary goal of Dig Dug is to clear the screen of all the enemies, dispatching them with your air pump in a manner that makes the loins of certain people on deviantART quiver at the thought, or via the slightly more cerebral method of dropping boulders upon them. This is how you move from level to level and score the most points, and this progression provides ample feedback to point out the primary goal to the player even in the absence of proper documentation.

The secondary goal is to clear as much dirt from the screen as possible.

A minimal amount of points are awarded for digging through a section of dirt. There's no special reward for clearing a lot of dirt other than the marginal point award for clearing yet another section. It's comparable to playing pinball and caroming a ball off of some otherwise barren surface that still rewards the player with the chime of a bell and some paltry amount of points: a slight nod to an incidental action that serves doubly as a minor reward and as negative feedback, telling the player "Yes, good, you're doing something necessary, but don't expect to get anywhere on that alone." My comparison starts to fall apart here, though, for while I haven't ever played a game of pinball and attempted to shoot the ball repeatedly off of surfaces with no targets upon them, I've played at least a few games of Dig Dug where I largely ignored the main goal in favor of digging up the screen as much as possible. I haven't done a scientific study, or even an unscientific one, but I wager that a lot of gamers have done the same thing.

As I mentioned, the game doesn't do much to prompt you to do this by design. In fact it slightly discourages it, as in addition to the low points awarded you also waste a lot of time if you dig around and ignore the enemies as they tend to surround you and (if I recall correctly) get faster as time wears on. So I suppose I lied when I said this was the secondary goal, as the game itself could scarcely be less concerned with it. Again, though, I'd wager you didn't disagree with me when I said it was a goal. Why?

To me, it seems there's just something inherently compelling about seeing this wall of stuff and tearing through as much of it as possible and beyond what is strictly necessary, regardless of whether the game provides a clear incentive to do so or not. (My sister refers to this feeling as "yumminess.") And there are numerous examples in games of an environment filled with some substance just begging to be cleared:


Oh, how I love to smash bricks! Super Mario World sort of took the piss out of things a bit by making a hit from below simply cause the ubiquitous fodder blocks to spin momentarily, but spin jumps still destroyed them, and the designers gave us a whole level dedicated to smashing them. Super Mario Bros. 2's sand-digging sections are a mixed bag, being incredibly fun when one is playing as Toad and a godawful chore as Toadstool. Choose wisely.


Yoshi's Island gets a special nod because my sister particularly enjoys smashing through the soft dirt with eggs and jumps and buttstomps in a quest to obliterate it all. There's also a spikey material that can be destroyed with eggs, though rather than travel through the stuff unabated the eggs ricochet off of this substance.


I seem to remember that cement wall in Level E being longer. Regardless, this is another game I played early on where I recognized the enjoyment I got from simply tearing down that wall with the hammer.


I'm slightly dismayed no one wrote about this game in December. Since I'm already terribly late in writing this post, maybe I'll go ahead and write another after I'm finished. Anyway, Level 19 of Bangai-O is entirely devoted to plowing through a giant, contiguous mass of stuff. I would like to thank Treasure for all but conclusively demonstrating with this level what I'm trying to get at and confirming that my sister and I are not weird, or at least are not alone in our weird compulsiveness.

Plenty more examples exist, but you get the idea by now. There are some games that have destruction of massive amounts of enemies or even the environment as their entire theme, but apart from that this special microcosm of obsessive annihilation can be found in many games, to the point that it's obvious designers recognize and exploit it, often by providing other rewards such has hidden power-ups to the thorough player or building a level around the concept. But, as in Dig Dug, the compulsion to destroy these masses of substance is often enough its own reward, and a pretty satisfying one.
#Community    #Retro
Login to vote this up!