4:50 AM on 01.08.2009 (server time)    0
I don’t know whether the fact I’m advertising a single mode is worth calling this a review, so I won’t. I’m not going to go into a lot of detail about the game, as I tend to only play instaCTF mode, I’m simply writing this to make people aware of the game, for those who have never played it.

Head over to http://sauerbraten.org/ to download the latest CTF Edition of the game. It’s a hyper fast-paced, instant-kill CTF game using crossbows!

I haven’t dabbled too much in the other, less psycho game modes and I don’t need to. InstaCTF is what got me hooked to this game and is what keeps me coming back. It also has level editing capabilities, where you can join a multiplayer game and you can all edit maps together. You can create underground tunnels and other pretty nifty stuff.

From the site:
“Much like the original Cube, the aim of this game is not necessarily to produce the most features & eye candy possible, but rather to allow map/geometry editing to be done dynamically in-game, to create fun gameplay and an elegant engine.”

I first downloaded this game around July last year, since then I’ve spent many an hour impaling little blue cat people to walls. If little cat people are not your thing the game allows you to change the skins of character models from the options menu. For me, there’s something strangely alluring about pinning cat-men to walls with crossbows… 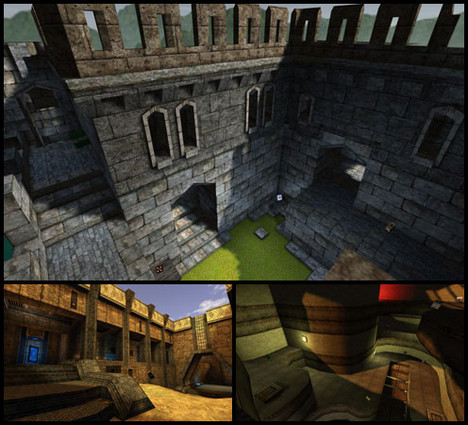