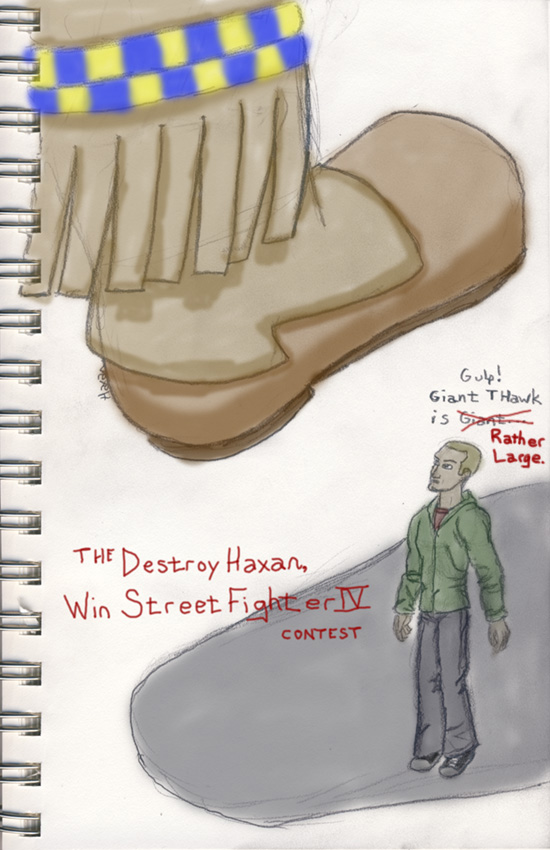 If you've been following up on the posts in the past week, you're going to have a bit of familiarity with the work of this week's cheapest player nominee. You see, Genki-JAM doesn't just stick to the in-game fighting for his brand of scrubbery. He gets into your life and wreaks havoc. In this case, he did it not to affect his own win record in a positive way. He was more looking to negatively affect the scores of his competitors.

You may remember the story of last week's Sagat battles on the PS3. In short, I was trying to get back to the bar to continue making time with this very attractive woman I had met. I rushed through that night's battles and destroyed all who challenged me. I figured if I could take out everybody in two rounds, I could get through the fights more quickly and get back to the bar that much quicker. As a result, that night's contestants were caught off guard, lost a lot and, ultimately, took a hit on their win percentages. Long story short, their overall scores went down.

Now, this took me all week to piece together, but I did finally figure it out. The girl in question was a plant. She was payed to be there at that exact brewery on that exact night at that exact time. She was told to find me (I believe the exact instructions were, "Seek out the tall geek with glasses in the Pixies hoodie"), and spark my interest. Get him interested, but don't overdo it, she was told. "If you do too good of a job, he'll blow off his Street Fighting engagement. And that's just missing the point."

This was a very risky plan, with a high chance of failure. But, our Genki-JAM is a smooth, calculating mofo. He knows which risks are worth taking. The man never fails to make a profit on any gamble. It worked like a charm. I left the bar, sped home, tore up the contestants including the current leader in the rankings (a feat which I'd yet to accomplish in the entire contest), and got my ass back to the next bar. But she wasn't there.

Damn you, Genki. You couldn't have sprung the extra cash for her to finish me off? I'm sure you'll agree, Genki-JAM has earned his place as the third nominee for Cheapest Player.

Onto business. Tonight starts off at 5pm EST, with a one-hour make-up session for PS3 players. I recommend getting there early to reserve a spot, as there'll only be time enough for 3 sets of matches. Then 6-8pm, it's 360 time. Tonight's matches are with Cammy. I expect to lose a lot. Don't let me down.

As far as the rest of the weekend goes, I am not going out of town. So, make-up sessions will be of primary concern to me. The contest winds down next week. And the make-up matches could prove to tip the scales of the entire competition. I'm not giving away any details in terms of results, but I will say that there are competitors with amazingly high win percentages that aren't at the top because of lack of total wins. Should these players get the proper motivation, we could see some changes to the rankings.

Okay, so Friday and Saturday will be very heavy on the Street Fighter playing. Here's the schedules:

This coming Tuesday will be the final official day with a theme character. I will finish out the week with two hour session just for make-ups. And one day next weekend will be a final epic day of street fighting for any remaining make-ups. I'll post the schedule on Sunday. I also have 2 more nominees for cheapest player. This is the last week of the contest, but we're going out with a bang.

Finally, Happy New Year, everybody. 2009 is going to be a great one.
#Community
Login to vote this up!