Several years ago for no particular reason I decided to attempt the task of emailing the infamous videogame movie director Uwe Boll. I will not say how I did this for fear of causing an upheveal of hate mail toward the man but I will say that I managed to contact the director and through this contact was able to give him my personal opinion about his videogame-to-movie adaptations. I could reprint the email and may, but for now I'll just give a brief synopsis of what was said. In short, I commented on the difficulty in adapting a 20-50 hour videogame into a 2 hour movie and then explained how the biggest issues with his films where the poor set, costume, and prop design. In general each movie has had at least one scene that impressed me. Keeping this in mind, I do not think Uwe Boll is a bad director and if anyone has seen any of his non-videogame films you would understand my reasoning. I do think that Uwe is not the best videogame director for the few reasons I listed above and the many more reasons I'm sure have been sprayed throughout the internet in various blogs and postings. So, what I will do is give a review of two of his films, one is videogame related as I will review Postal. The other is a non-videogame movie Seed. The first thing to remember is not to take Postal seriously. The game is not a serious one unless so the movie should not be taken seriously as well. I will first stipulate that the movie does suffer from some of the same pitfalls as the other Uwe Boll videogame movies such as poor set and costume design. And by design I mean the stuff looks fake and like it belongs in a stage or theater production. The movie itself is about some poor schmo who in trying to look for a job and an escape from his life lands in the middle of a terrorist and seperate cult plot to destroy the world. Dave Foley of Kids in the Hall fame is in the film and is awesome in his performance as Uncle Dave, can you believe it, to the main character Dude played by Zach Ward.

The film has a lot of random slapstick jokes that are on par with Freddie Got Fingered and South Park. However, most of the time these jokes work. I don't think the movie will ever be classic as it tries a little to hard to be funny and at times just doesn't communicate the humor its going for. I felt like I had seen some of the jokes before and in better films. Also, the director makes a cameo in the film as himself fighting the creator of the Postal videogame who plays himself. The two duke it out in a boxing fight which pertains to the real boxing match that Uwe held against internet abusers a few years back. These fights are also a special feature on the DVD. This being said the movie is basically an in your face from Uwe to all the haters out there. Thus, I recommend the movie as it will be entertaining and unforgettable as it seems to linger by being both bad and good. Some people will probably love and some will hate it and everyone else will rate it on IMDB without actually seeing it. 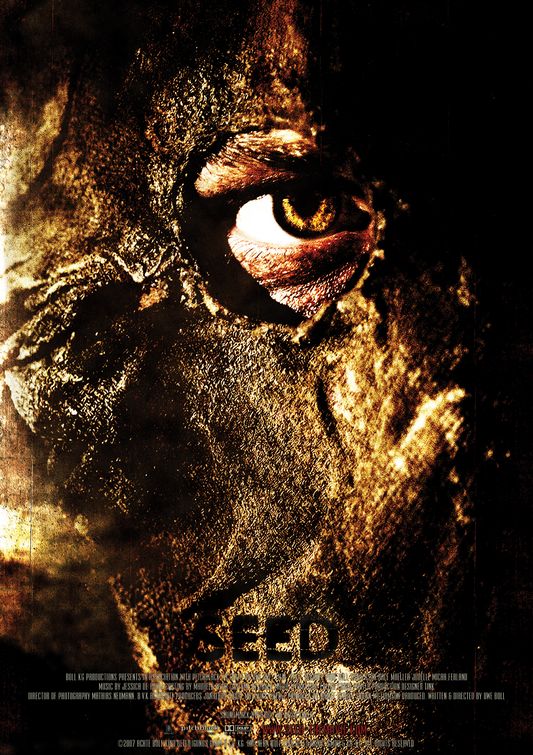 Seed is what I would call a good horror film. The film is slow and at times a bit campy but overall it is a good horror film. The basic plot is that a serial killer apptly named Seed is placed in the electric chair. However, barring an old urban legend of a law, once a person is fried twice in a row without dieing. If the person survives the third attempt the individual is allowed to heal up and go free. In the film after surviving the first two jolts of electricity the people present decide to bury Seed alive fearing he will survive another attempt and be set free. This plot, however, thinly covers the true plot of the movie that follows the capture of Seed, the execution, and Seeds revenge. The film is very arthouse and the suspense builds and builds as the audience is given witness to the brutal acts of Seed and the stigmas surrounding the characters from the police in the film. Again I must stipulate that the film is slow. However, the film provides some truely horrifying and shocking moments. Uwe Boll is an avid animal lover and Peta supporter and thus, uses real animal abuse footage in the film such as a video og a dog walking around without skin. The film also has one particular horrifying scene involving a baby, but I will not say more at risk of spoiling the film. The movie not out to give anyone a good day is what I'm basically trying to say and even for myself who is pretty unimpressed by shock torture movies such as Hostel and Faces of Death I was forced to cringe a bit.

Now the movie does have some failings. For one, a couple of scenes are so dark that I cannot see what is going on in terms of violence or action. This effect heightens the realism of the film yet also detracts from the visual stimulas that a movie is suppoed to provide. Another issue that I have mentioned is the pacing of the film. Some of the gruesome moments linger to long, while others do not last long enough. Probably the biggest issue is that there are some plot holes or rather errors. The plot makes since, but some of the fake news information for the character does not add up properly and detracts from this serial killer rather then adds some suspense and awe.

In the end, I recommend this film and suggest that people give Uwe a chance when it at least comes to the non-videogame movies. I always see Uwe as this developing director who is growing in his technique and style. The audience grows with the director and gets a preview of how this artists works develop. Unfortunately, this development involves the slaughter of favorite videogames and further bars any hope of decent videogame-to-film adaptations...

P.S. I don't know if I did the images correctly so any advice would be helpful and welcomed.
#Community    #Movies
Login to vote this up!

Gaming have always been a part of my life in some facit or another. I started with the Atari and moved on to the Nintendo and eventually Gameboy. The NES was a prize and I remember the hours I spent playing Super Mario Bros. 3 trying to find that whistle. Now of course the game can be completed in like 30 minutes, but I digress. Today, I am a proude Xbox 360 owner. However, I do try and branch out to the other systems when I am able. Currently, I am switching between Fallout 3, Left 4 Dead, and the occassional Rock Band 2 jam sessions with friends.

Aside from games I also heavily enjoy movies and writing. I am working on my English Masters in the non-digital world in hopes of becoming a better and hopefully someday more highly published writer. I'll probably post some of my stuff up on here occassionally to get the opinions of the crowds. Until then, I have provided a few lists of my favorites, enjoy!

10 Favorite Games in no particular order just to name a few:

I am also an avid movie lover and tend to stay up to date on the latest movie news and releases. 10 Favorite Movies in no particular order:

I do like animated movies and films including of course anime. So in no particular order my favorite animated films and shows:

I also read comics here is what I currently have on the rack:

I am an all around nerd and enjoy a variety of different mediums and forums.