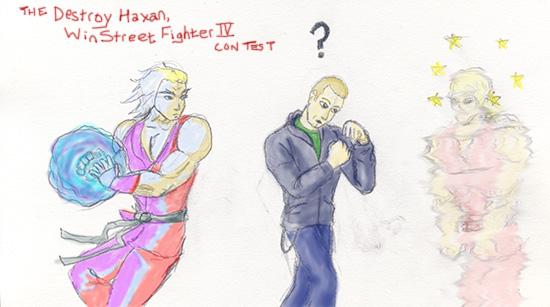 To be fair, this week's nominee for cheapest Street Fighter isn't a one-man job. You see, Rab is a malicious mastermind in the art of Street Fighting scrubbery. He can usually be found with at least one of his minions manning the network adapter, while he himself mans the 360 controller. Get where I'm coming from? Well, maybe it would be more clear if I describe Rab's whole operation.

Rab's Street Fighter base of operations is pretty minimalist. There's his television, an xbox 360, a chair for him to sit on, and a minion in roller skates. The room itself is incredibly large (it's actually rented warehouse space), about half the size of a football field. And like a football field, there are white lines drawn at intervals throughout the room. On the far end sits Rab and his gaming equipment. On the other is his wireless router. Get where this is going yet?

The 360 network adapter is connected to the 360 by a 50 yard-long ethernet cable. It is held by the roller-skate wearing minion, who will constantly skate up and down the room throughout the play session. You remember the lines drawn on the floor? They don't represent yards or foul lines like in other sports. They are what Rab refers to as Lag Lines. Each line represents a different state of lag which can be achieved when the 360's wireless adapter is far enough away from the Wi-Fi router.

Have you ever been in the middle of a game and everything is playing as smooth as can be? You're kicking some major ass, and your opponent seems to be completely unable to mount any kind of an offensive. Then, all of a sudden, the game starts lagging. His fighter is all over the place. You're taking hits from places where there isn't even an opponent present. You lose the match that you were a single breath away from winning. Has this ever happened to you? You faced an individual like-minded to Rab.

Through a complex language of gestures and body signals, Rab is in constant communication with his minion. A neck twist here and a jerk of his reight knee there, he is telling his cohort how far away to get that netwrok adapter away from the router. The further away it is, the less easy it sends a signal to the modem, thus more lag.

Now you're thinking, doesn't this lag effect him, too? How does this make it cheap? What's even the point? Well, Rab has mastered the effects of various forms of lag. And he knows when it's going to cut in and out. For you it's unexpected. For him, he knows the right point to pop that Spinning Piledriver or Akuma Death Thingamabob, hitting you in the midst of your confusion. Chances are that when playing against Rab, the second you get the upper hand is just ten seconds before you're lyng in defeat.

Rab. Our second nominee for the Cheapest Player of the Street Fighter Contest. Remember each week a new competitor will be showcased as a cheap player. At that point you will be able to vote for your choice of biggest scrub and they will in turn win a cheap prize. As for the results of the contest itself, they can be found (almost daily) in the forums.


Onto, business. Today I'll be getting my Street Fighter II HDBBQ on between 2 and 7 pm EST. I'll be on the 360 from 2-5, and on the PS3 between 5-7. If you missed the forum update yesterday, let me play back an update:
"People have been having a rough time getting a hold of me last night and today, because I've been on and off so sporadically. So, my Christmas presents to you all are as follows: 1) Christmas Eve and Christmas Day battles will be freebie make-ups. If you didn't/aren't able to catch me, don't worry you can make up the battles complete with the 3 bonus matches as any later date before the contest ends. Just to clarify, 360 folk get make-up matches with Sagat, and PS3 folk likewise with Akuma. So no worries. I needed the time to play Takeshi's phenomenal Dtoid level now that I have Little Big Planet, anyways! "

Today's officially the 360 Bison day. But you can also take advantage of the Freebie Make-ups from Xmas Eve's Sagat fights (you'll still get the bonus 3 matches from that day). Or hit me up with any make-up matches (sans bonus matches) that you're still needing to do yet, depending upon time and number of challenges. PS3 folk, you likewise have the opportunity to make up the Akuma matches from yesterday complete with bonus matches, or knock out any other make-ups that you're needing to do.

Hope you had a Merry Holiday time the last couple of days (assuming that it's your bag). And I'll see you with the next Weekly Recap on Sunday.
#Community
Login to vote this up!