Call of Duty: World at War for the Wii is not an incredible game, but it is a good Call of Duty game. Let me organize these thoughts into a few categories; Graphics, Game play, Story telling. 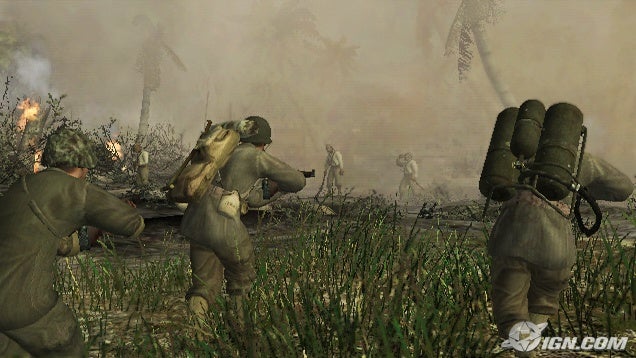 Lets get the shallow first impressions out of the way. Graphically it may not initially impress anybody but after a few minutes one realizes that the scale is quite nice. Draw distance is pretty impressive, and there always seems to be quite a bit going on including some pretty impressive explosions, and a number of other effects. Treyarch is using an adapted CoD4 engine and thus the visuals are pretty impressive. The defining moment for me would have to be the first time entering a Japanese jungle. There was a great amount of detail put into the lush environment and the well camouflaged Japanese soldiers erupting out of the landscape were a nice touch. The game is relatively intense and the graphics really help sell the experience. The character model's aren't the smoothest and the textures pop in once in a while but it is definitely a decent representation of what can be found on the 360 or PS3.

The game takes place across a number of countries and the change in setting is truly appreciated as the environments are sort of monochromatic. These switches in locale actually do more than simply change up the visuals though...

Going from Japan to Russia not only triggers a darker graphical tone but also switches up the gameplay significantly. The Japanese terrain is comprised of tunnels, and valleys where your success relies on your ability to take cover and react to close combat. The Flamethrower is used as a way to plow through the tight quarters of tunnels or trenches but thats not to say its all run and gun. There is a nice balance struck between the methodical 'cover, wait, shoot' type gameplay and the reward - plowing through japanese soldiers with flames blazing. 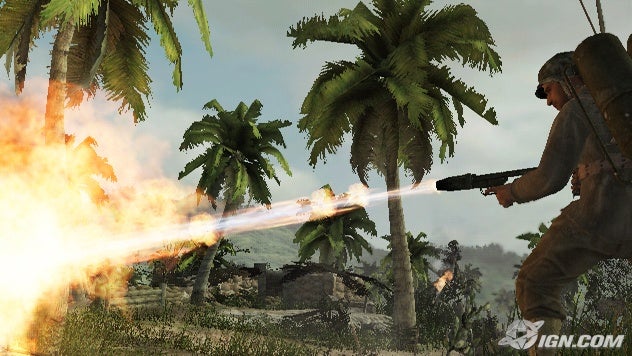 Just as this gets a bit predictable though Treyarch takes us to Russia where a new type of play is introduced. Fleeing from the enemy and then taking cover to Snipe those below. I've got to say that the introductory Russian levels were what really pulled me into the game. The variety was unexpected and really well implemented. They're also thrown in levels in which you control tanks and defend against them.

The defining factor of all Wii games, control, is pretty standard here. I'm not going to get into button mapping but rather generally state that the controls work really well most of the time. The aiming sensitivity is adjustable, not to the extent of some other games out there but it is adequate. I never had problems aiming, the turning can be incredibly quick and the camera movement also has a separate sensitivity which is pretty great at helping you avoid jerky movement. A quick swipe with the remote will execute a melee attack but that is really the extent of the motion control that I came across. 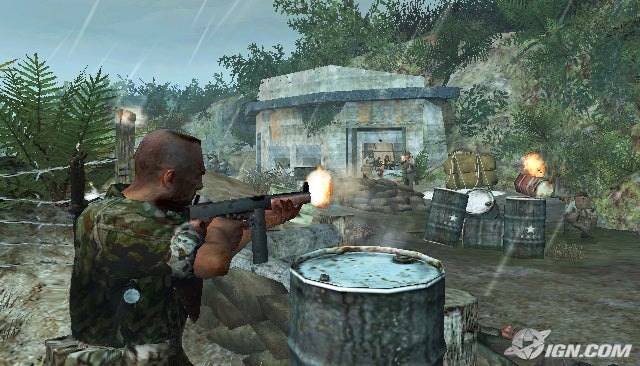 Like I said, the controls work but I came across one odd quirk. The A button makes you run, which is great, However I found that sometimes it causes problems with movement. Sometimes when I hold A to run I can't or don't turn when I want too. Also, sometimes I feel like the A button toggles run. I need to give it a bit more play time to make sure, but it was acting pretty inconsistently.

I have to say I was pretty surprised by a few things about the story, mostly the delivery. A staple of the Call of Duty franchise seems to be the mission briefing happening in real time, allowing the player to control what he sees by looking around. This is still here but there are moments in this game where this simple concept becomes pretty impact full. For instance near the beginning of the game there is a moment where you awaken amongst a pile of corpses. Your vision is dark but you can see a German execute another. You can't move but you can look around and somebody notices. Another soldier was playing dead and the two of you make a break for it. This scenario evolves to become some of my favourite in the game thus far. Little touches, like being instructed to wait for aural cover so enemies won't hear your sniper rifle, help develop characters, the narrative and the gameplay in a rather seamless way. I'm pretty impressed.

While I haven't finished the game yet, I've played through around six or seven hours of it and as a Wii owner I'm impressed and relieved that Treyarch has included so much here. It truly is Call of Duty: World at War, and not some arbitrary port to fill the void. The campaign is intact and running well, one of the more cinematic experiences on the Wii, while not sacrificing gameplay. More importantly though is that Treyarch seems to be one of a growing number of developers acknowledging Nintendo's online infrastructure. CoD:WaW joins the ranks of Guitar Hero, Rock Band 2, and Mario Kart as far as multiplayer is concerned. While some modes are missing the Wii version makes it online with maps and perks intact. It truly is an emulation of the CoD4 online and it works really really well. Again, Impressive. 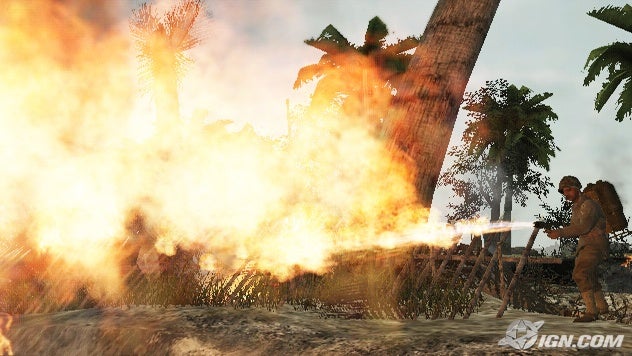 Overall, I am really happy to see this kind of effort put into the Wii version of anything! I was legitimately impressed (perhaps because of my initial skepticism) by Treyarch's effort and hope to see Infinity Ward continue the tradition. I'd say that this is a must buy if you are a sole Wii owner like myself- If your into the genre.
#Community
Login to vote this up!