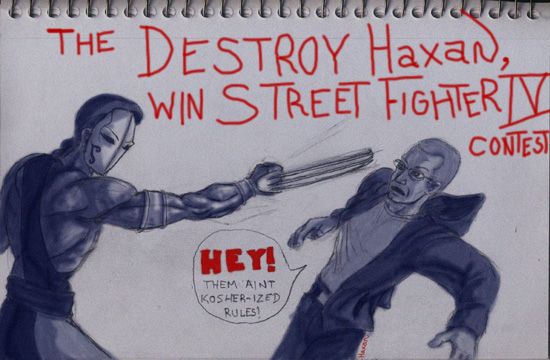 Heys, folks. Week one of battle is now behind us. We've had 5 people actually compete so far, and up till now it's all been on the Playstation 3. Today that all changes as 360 owners are now going to jump into play! I expect many new challengers to enter the tournament.

If you don't know what I'm talking about, all rules and info can be found here: rules. So, give that a good read, add me as a friend to your console of choice, and challenge me at Super Street Fighter II Turbo HD Remix anytime you see me online. Battle me as that day's theme character for your chance to win a copy of Street Fighter IV or other prizes.

Enough with that. Here are the rankings of the first 5 days of battle:

I keep saying that it's not too late to join. I now have a great way to show you exactly what I mean. The current leader, senisan has so far only competed on one day. He wasted me with Ken, winning 13 of the 15 total matches. Nilcam, was off to a rough start on day one, with the exact opposite score. But Nilcam moved his way up to second place (and is on his way to stealing the top spot) by competing every day since then and improving his win record. Your total wins are just as important as your win ratio. So you don't have to compete every day to win. But, just because you have a bad day, doesn't mean you're out.

Some shoutouts for week one:

Yojimbo is the front-runner for the Cheapest Fighter award, but did so not in the way that you may be thinking. He's employed a psychological tactic that isn't in the game code, and is incredibly effective. If you ask him, he may share his secret (but, somehow, I'm doubting it). It's not too late to outdo him with some good, old-fashioned scrubby tactics. So let's see some more tik-throws, Psycho Crusher spamming and cheap trap set-ups.

Senisan seriously layed waste to me using Ken. This was by far, my biggest ass-kicking of the week. I'm very impressed and can't wait for the opportunity to redeem myself.

CWal37 courageously jumped into this challenge having never played a Street Fighter game before last week. He did really well for a 1st-timer. I really hope to watch his skills improve over time. If you ever need a sparring partner beyond this contest, message me. Grab you a headset and we can go over strategies in-game sometime.

Nilcam has competed every day so far. Always there the minute I log on each night. Last night he gave my Ryu some epic battles with Blanka. I've never had the "chess-style" battles (where you're trying to outthink your opponent moreso than outfight him/her) against someone using Blanka before. He came out with 8 of 15 wins and my respect.

Okay, Xbox fans. Your day in the sun is now. Get online and give me what for! For those wanting to compete, again I ask for you to give the rules a good read-through, and send me that friend request to get things started!

Finally, regular ranking updates will find themselves in the forums. On Sundays throughout the contest I'll be posting these weekly recaps in the c-blogs.

Complete rules can be found here.


Here's the schedule for each system:
(M. Bison, Vega and Balrog correspond to the switched up, non-Japanese versions of their names)