This is Why I Love Cheap Ass Gamer Volume I

12:56 PM on 11.25.2008 (server time)    0
Ok, we've all seen my posts talking about how awesome Goozex is, but let's take it back a little bit... get a little more old school.
Straight up game swapping via Cheap Ass Gamer has been a way to get awesome games for many years for me now and I may have just hit the motherload today.
And by motherload I mean I think I came a little bit when I opened the box and saw everything.
By unloading a good few of my more current games (like Crisis Core and Riviera for PSP, FFIII for DS, some Shining games and Shadow Hears 2 for PS2, some Zelda Cube titles and what not) I got 5 games in return.
Yes, I traded about a dozen for only 5.

Why on earth would I trade 12 games (some rare or valuable) just for 5 measly games?
It's obvious that it's gotta be SOMETHING big with such a large scale trade, right?
I could explain it all to you, but pictures speak louder than words... 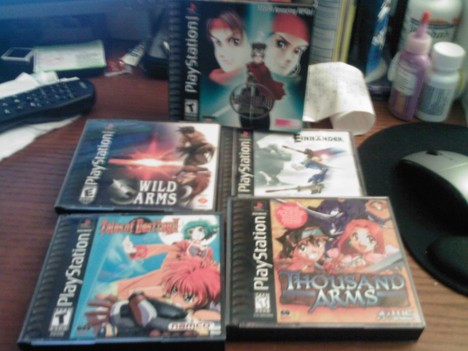 Rock the fuck on.
#Community    #Retro
Login to vote this up!