If I'm addicted to something does it mean that I like it? [Bangai-O Spirits]

8:34 AM on 11.04.2008 (server time)    0
The DS is my favourite system. It has enjoyed recently, if not constantly, a downpour of games that I want/need. It would seem that this year a new RPG was announced for the platform every day. While I was ecstatic about the incoming RPGs (and other games like MOON, Kirby, etc) I found myself just excited about playing my DS, and since I recently gave up on FFIII, and needed a break from Pokemon (70+ hours?! wtf...) I head out to my local EB and was confronted by a problem.

I didn't know what I wanted to buy.

This is a dangerous position to be in...So of course, none of the RPGs I wanted were out yet; Square sat a freshly baked apple pie on the sill, but the taste FFIII left in my mouth superseded the sweet aroma that was FFIV.

I've wanted Prof.Layton for a while but I was in the mood for a traditional, sort of action oriented game, and Ninja Gaiden, used, was still $45, so that was a no-go. As an aside, I've always been a big fan of SHMUPS, I'm not any good but I'm ALWAYS looking for a good one (Haven't played Ikaruga, trying to get the GC version) So Bangai-O caught my eye; the price was right, it was a treasure game, I had heard good things- I bought it. 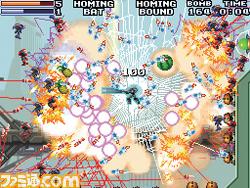 Bangai-O is not a SHMUP.

Well, at least it isn't a traditional one. You control a mech (awesome) and you do 'Shoot'em up' (awesome) But it's sort of an arena based game, with no story (but a very entertaining Tutorial...strangely...) The game is essentially a series of levels designed by the developer in which players must destroy designated targets. The levels are not connected in any way, there is no progression through the game (you can play any level at any time).

You can assign two weapon types to your mech, plus two special weapons but this isn't a review so you probably don't care.

Here's where my title comes in; If I'm addicted to something, does it mean that I like it?

To be honest, I was surprised to see that the game was not what I had envisioned, and initially, was disappointed, and sort of confused.

For the first time in a while I spouted forth the most vile words known to a gamer playing a game they just brought home; "I think I'm going to trade this in..." This crossed my mind within 2 or so hours of play, it just wasn't what I was looking for and I think that set me off (to be redundant). However, that night I curled up with my DS, as I usually do, (to my Shakespeare professors distress.) and decided I would give the game a chance. 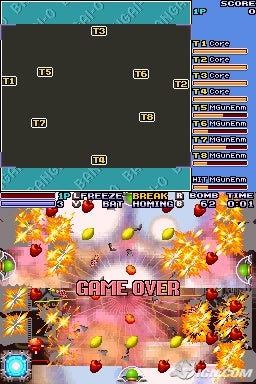 Well that night something magical happened. I learned how to play the game, I learned how it worked, and of course the missile paths and bounce physics looked awesome on those little screens. I don't think I ever thought "Okay this game is awesome! I should have gave it a chance!" No, I never thought that, and I'm not sure if I think that now, a few weeks later. What happened was I couldn't stop playing it.

I became addicted, which I believe to be rooted in the games near perfect difficulty and learning curve. It kept me playing, I would get closer, better almost every time. The simple goals always seemed attainable, even though I had to restart any given level multiple times. I couldn't stop playing the game, not that night, not the next day. Treasure included many many levels, in a way one could relate it to Mario Galaxy...Hear me out.

The designers of Galaxy invented a hub that allowed them to create as many different levels as they wanted, none of them had to be connected in any way. Every idea was legitimate and successfully brought to fruition because they were not tied down by continuity, or story. In Bangai-O this process is employed aswell, developers use a set of tools to create a number of unique levels, and even puzzles- This was crucial to my addiction.

So I'm still a bit confused...Does my motivation, which is inherently addiction based on smart design, mean that I like the game or simply that I appreciate the game and it's design...In writing this I think it's helped me realize that I do truly love this game.

Has a similar thing happened to anybody else? Maybe I should make a thread in the forum for this, yay or nay?

[Also, this month's topic couldn't have come at a better time. My first musing will likely be related to the game's level creator, stay tuned!]
#Community
Login to vote this up!