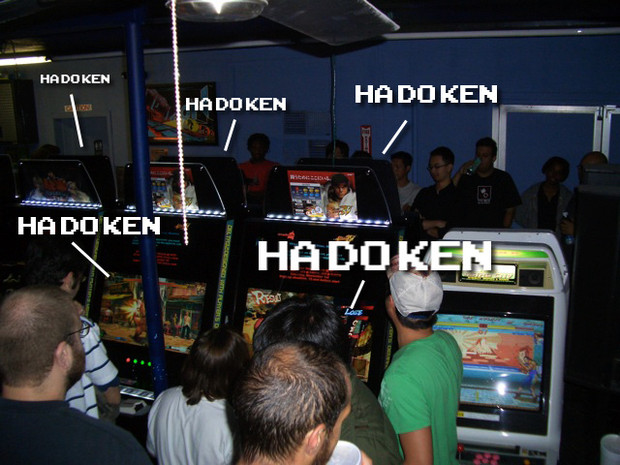 Arcade UFO is an arcade in Austin that features several Japanese-style sit down cabinets, among other traditional cabinet games. This Saturday they hosted a Street Fighter tournament that included Street Fighter II, Third Strike, and Street Fighter 4. Yes, they are rockin' the SF4 arcade.

I actually went to watch the 3rd Strike battles, cause you know, 3rd Strike is ten kinds of awesome. I am warming up to SF4, it's got some coolness brewin' and it has been consistently drawing crowds. But it does cost a dollar (day-um!!)

But the 3rd Strike battles in the tourney were sweet. There is just something about watching top players in a crowd setting. Especially so if you're a fan of all things Street Fighter and can recognize the challenges and nuances of the battles. I probably should have entered myself just for the fun and experience of it, but I had no prob waqtching the entrants go to town on each other. I wouldn't say it was at the intensity of stuff you might see at EVO, but there were some kick ass bouts. There were a couple dudes there from other cities as well, and I can admire that kind of dedication to play. And of course it got a couple friends and I psyched up to get a little SF action going on our own little arcade (see my last post... )