The above picture of what is obviously Sackboy, illustrates how amazing this game is

Okay, there's a lot in this game. A LOT. They thought of shit I didn't even think of and then some. Jetpacks will seem like amateur hour after you see some of the neat stuff the builder can do.

I didn't play much of the beta so I don't know how much was in the beta build. I've played through all of the Garden levels, a few levels into the Savannah.

I guess... I've heard the Q'uran song, I have no idea. Frankly they could stick just about anything in there and you'd never know. I'm too busy playing the game to care.

The levels you played in the beta are identical in the final build. Same as what's been available to play since at least PAX that I know of.

The level builder is quite robust and has a lot to see and do. The tutorials are VERY long and tedious, but they cover a lot, so if you want to know about and use all the tools in the game, sit down for a good hour of tutorial levels or so. Thankfully you can pick them up and put them down at your leisure.

As of right now, the game says that the LBP servers are down, so you can't upload or download any levels. Whatever this does for the multiplayer experience, I'm sure will help build onto a well designed game.

- Level builder is identical to the demo. People will be up and running again in no time.
- It's really easy to clean up on trophies very quickly in the level builder.
- This game screams upgrades and DLC, so expect to see a lot of new things to keep the game alive.
- Stephen Fry is a fantastic addition to the game and helps make the experience work better than I previously expected.

- The game is 720p/480p. There's no 1080i/p upscaling.
- Building tutorials are retarded long and necessary to actually do anything in the level creator.
- It's lonely all by yourself.
- Sackboy is REALLY slow compared to other heroes we've seen. He ain't going to be going toe to toe with Sonic anytime soon.
- One of the trophies will be impossible to get. Actually 2 will be.

Verdict so far: If this is Sony's effort to engender community and online with a game, I think they'll succeed so long as our attention spans hold out on the game. I see there will be a lot of shelf life out of the game from now until through the new year, but afterwards, people are going to be looking to other games unless the community just catches ablaze with the level builder and developer made levels. This game as is, feels incomplete as a retail title, but there's clearly building blocks in place to make it something fantastic if it does as well or better than Sony hopes it will. At the very worst, there could be a good deal of niche support for this title for many years, as Sackboy is incredibly iconic. I've never seen a shit-eating grin feel so charming from the get go. 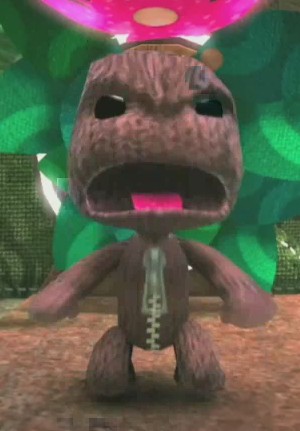 WHOA MAN! That was a compliment.
#Community
Login to vote this up!