8:30 PM on 10.12.2008 (server time)    0
I have to admit I played too little of the first Brothers in Arms. But its sequel, Brothers in Arms Hell's Highway is giving my a good ride so far. Im playing it on my PC.
The only bad thing about playing a sequel so cinematic like this one is that I dont get shit about what the hell is going on with the characters and the story that was on the first BIA... from time to time I get a cinematic with screens from the original game, or something that happened on the original game, also with some character conflict, etc, etc... but who knows, I dont know what the fuck are they talking about, I only know that my objective is to kill nazis, and thats allways a good thing.

The BIAHH has a good idea behind, like the first one, not beign the simple WWII shooter it gives you a shooter with some tactical goodies, very nice tactics overall make it quite addictive.
If you dont understad the tactic thing that Iam talking about lets go over it:
You can shoot nazis, of course, but if you try to do it on your own, behind cover is game over.
You are in charge of sometimes up to two squads, one can be a assault squad with firepower to match infantry, the other one can be a bazooka squad or a machine gun placement. So lets suposse you have a situation, the nazis are over a field of cows, you can kill the cows and place the squad with the machine gun behind cover, command them to keep the nazis pinned down and then with the help of your tactical map and your assault team: flank them.
That´s overall the main idea of BIAHH, you have to use your brains, is a FPS with elements drawn from RPG´s like Company of Heroes. 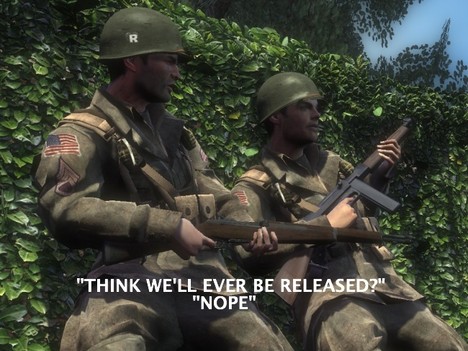