Feel the Hatred: Videogame stories and people who won't shutup about them.

5:41 PM on 09.29.2008 (server time)    0
Videogames is the new medium for telling stories. I can't tell you how many time I heard that sentence come out of a game designer, game journalist, or people on forums and to tell you the truth I'm tired of it. I'm tired of the constant debates about videogame stories, I'm tired of how every game developer these days is trying to slap on a deep story onto their games, and I'm tired of the bloody "games are art debate". I've been tired of it for so long but never came up with an excuse to talk about it. But now with this monthly musings topic I have an excuse to vent.

Over the years I have watched stories in videogames become more important and more complicated. The problem I have with this is they don't tell them the way they should. What makes a videogame stand out among other media is the gameplay and thus it should take advantage of that when telling a story. But today most games still insist on telling their stories through cutscenes and scrolling text and the ones that actually do tell their stories through gameplay are few and far between. Shit, the only games I can think of that tell their stories the way they should are Portal, Bioshock, and Halflife 2. There are some games that attempt to add interactivity to the cutscenes but I don't see enough of them and it still doesn't excuse the fact that they rely too heavily on cutscenes. 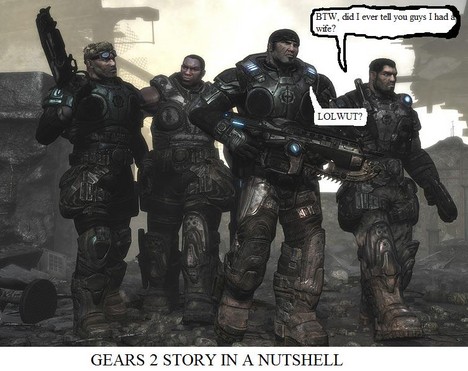 And then the other thing that pisses me off is how people who do this stuff treat other people who disagree with them. Say somebody doesn't like Half Life 2, and they express it in a blog or on forums. This person then gets called a moron by these people, saying they don't get it or they can't comprehend the greatness of Half life. Now this isn't something that solely happens with games with good stories, It happens with pretty much every popular game, it's just much more annoying in this case because the people who insult this person try to be smart about it. Instead of replies like " You are a moron GTFO" you get stuff like " Well you clearly can't comprehend what makes this game great, the reason why this game is great.....................You are just shallow minded." Or they will find some other way to excuse what that person just said. In fact, I can guarantee some people will read up to the part where I said I didn't like how Braid's story was told and then will skip over the rest of this post and do exactly this. Although I guess you can say this is a problem with gamers in general.

Now, I'm not saying that games should stop trying to have stories. What I'm saying is that a game that prides itself on its story shouldn't rely so much on cutscenes. And that developers working on certain games should step back and think " is a big storyline really needed in my game? Is it going to add anything to it?"

Nor am I saying for people to stop talking about videogame stories. What I'm saying is if 3/4 of what you say on the internet has to do with videogames stories, take a break for christ sakes and talk about something else. There are other things about videogames to talk about then their stories. I am also saying people should be more open minded, this goes for everybody not just the story obssesives. Somebody somewhere is not going to like a game you think is amazing, it's their opinion. So don't freak out on somebody for expressing their opinion.
#Community
Login to vote this up!