10:52 PM on 09.28.2008 (server time)    0
This past weekend a bunch of us NY/NJ Dtoiders got together. Some people couldn't make it (I still loves you, Keener, Nick and Petie) but we still ended up having a fun time. I don't think it's really a NARP because we pretty much just went out for dinner and checked out the Street Fighter IV cabinets at Chinatown fair, but I good time was had by all.

I'll post some of the photos here for those of you who don't have the Facebooks. 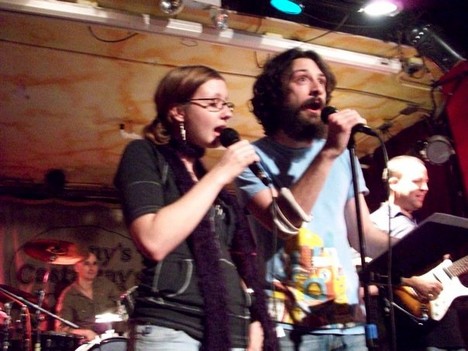 It got better later though. They had karaoke, but not in the conventional sense. The band played the song for you and you had a sheet of paper with the music on it, which was awesome. I sang Ramblin Man (I think Josh has the video), and later Devon and I sang 99 Red Balloons completely wasted, dancing all crazy for the 5 people left in the bar at 3 am.

On a somewhat unrelated note, Devon finds the coolest stuff in dumpsters.

The end.
#Community
Login to vote this up!