MATLOCKING: Why I DON'T Think the Rock Band AC/DC Expansion Will Be DLC 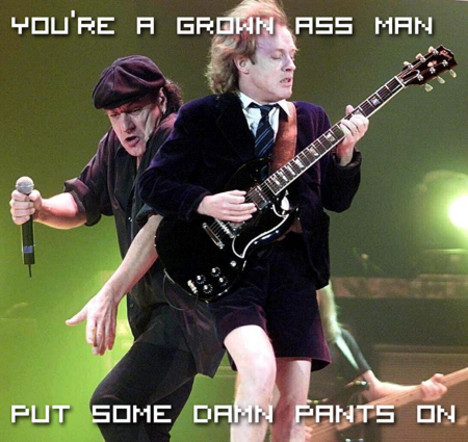 So bringing this back around to Rock Band, if Live at Donnington was released as DLC, it would be available as individual songs just like every other album is for Rock Band (as was promised to us by Harmonix) and obviously AC/DC would be opposed to this considering it's the exact same model as iTunes. So how does Harmonix release it while meeting the bands demands? Well they give them special treatment and release it exclusively as a physical disc where people have to buy the whole album. You could probably rip it to the hard drive and make it just like the other DLC ala the RB1 songs but at that point you've still purchased the entire album instead of cherry picking the ones you want. This keeps AC/DC happy since you now have the whole album, and Harmonix happy because the songs at that point are still integrated in to the game just like any other DLC.

Perhaps putting “Let There Be Rock” on the RB2 disc was part of Harmonix's conditions for doing this and also why “Let There Be Rock” was the song selected as opposed to say “Back in Black” since AC/DC wouldn't want to put up one of their more famous songs (though ironically, I like LTBR more than any of their other songs I've heard).

The only thing I could think of that would negate this theory is the fact that this is pretty much a greatest hits collection as opposed to a crafted album, so maybe they wouldn't care as much about it being sold separately. I don't know though. The very existence of this thing is still technically a rumor so whatever. What do you guys think?
#Community
Login to vote this up!