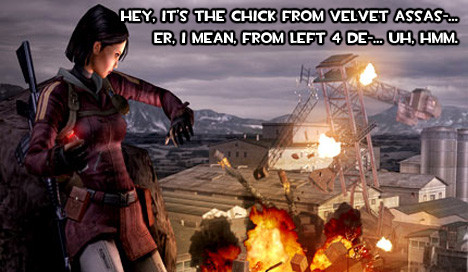 The game has an interesting in-game currency system. Evidently, you can make money by committing certain acts, such as destroying billboards. You can also lose money by killing civillians. I thought this was a nice touch, even though the reason for the financial loss -- your employers pay off the media(?) to sweep it under the rug -- is a little creepy. I did enjoy the fact that I could fly or drive into the city and hijack sportscars, even using vehicles to go incognito.

Essentially, despite some shortcomings, Mercenaries 2 appears to be a fairly well thought-out game. I was downright shocked to find that I'd actually run out of missiles in the helicopter, and that I didn't have an inexplicably unlimited supply. Even the chopper's bullets had a (generous) limit. Some might say that this breaks the already-ludicrous flow of the game. You can hijack helicopters from the ground, for frak's sake. It wasn't too jarring of an intrusion by reality, though.

Frustration did, however, set in a few times. For example, I picked up a pistol that someone had dropped, only to find that the assault rifle I'd dropped had mysteriously vanished, leaving me with only a pistol and a near-empty rocket launcher. So, it's not without its bugs. But even when I found myself with the short end of the stick in a ridiculously overwhelming situation, I was still having a figurative blast. All in all, a good demo for a promising, though questionable, game.

Does it make me want to buy it? Yes. Just barely. I feel like the (in my opinion) confusing mission objectives could get on one's nerves, but the game should hopefully make up for that with its sheer, glorious "mayhem factor."
#Community    #Xbox360
Login to vote this up!