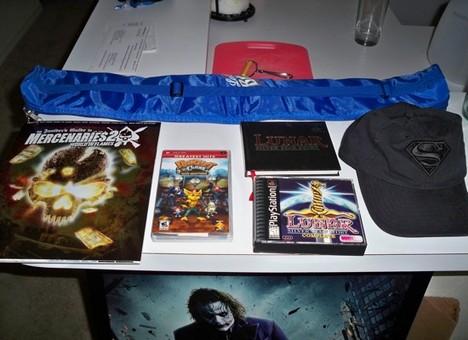 It's been said before and I'm saying it again: Destructoid has the best community of any gaming site ever. A while back I posted a comment in one of Yojimbo's blog asking him to send me a piece of his swag he won: a Superman hat. I was dead ass serious about him sending me that hat and if he didn't, I was planning to blow up his PS3.

To my surprise, he actually was cool with sending me the hat but he also included some other goodies including:

*A Mercenaries 2 guide of some sort
*Ratchet and Clank: Size Matters for the PSP (which will be the first R&C I've ever played)
*A copy of Lunar Silver Star Story complete with a strategy guide (another first for me)
*A enlarged blue condom (lord knows it's hard for me to find condoms here in Florida)

So many thanks to Yojimbo for hooking me up with some sweet merchandise. I've sent your package in the mail and you should be receiving it shortly. My package isn't as impressive as yours but I'm sure it will suffice. Wow, that totally came out wrong but you know what the fuck I mean. Thanks once again man, I really appreciate it. And I don't care what CountingConflict says about you, you're a-okay in my book.
#Community
Login to vote this up!