3:14 PM on 09.03.2008 (server time)    0
Surprise! PAX was an event! It happened just recently! It sure was fun being in attendance. But you can't really have attended PAX unless you write a note to every person you interacted with. So for that reason, I will not write a note to any of you fuckers.

I'LL TOTALLY MAKE A VIDEO INSTEAD!

I figure I will spend this time to give you impressions about the actual games at PAX. Yeah, while everyone else was playing grabass, some of us were playing video games. GRAB ASS.


First off is my personal Game of Show:

Mortal Kombat vs. DC Universe - So awesome. I may be a bit bias towards this game since I was the ONLY person on board for the concept and believed it would be good. But even, after playing just one match, everyone who played it was sold on it and could tell this game was a winner. The Joker being playable was awesome, except that when I fought against him (by Tazar) I got reemed.

Puzzle Quest Galactrix - If eyes could melt while watching a game, my eyes would have melted watching this. This game looks amazing and totally builds on the first game. The space theme is integrated perfectly and the layout is prettier than pretty. Instant Awesome.

Gears of War 2 - I actually never thought I would get to play this BUT ALAS, I did. This game is freaking amazing. I'm not even joking. I had so much fun playing this. The graphics have been noticeably improved. The scenery is gorgeous. The new chainsaw death animation from behind had everyone going "OOOOOOOOH!!" each time it happened. People will bitch that it's no different from the first Gears but those people can go back to playing Call of Duty 4 and making out with homeless women.

Left 4 Dead - Haha yeah right. This was by far the hardest game to get to play at PAX. Lines for it were about an hour and a half at least. However, I did stand with -D-, Hoygeit, and Pheonixblood for about 10 minutes and watched a group play. This game looks like it could be the best co-op game...EVER. The setting was really creepy and the implementation of working with 3 other people looked perfect. Zombie blasting at it's finest.

Guitar Hero: World Tour and Rock Band 2 - I first took the stage with -D- on drums, Tazarthayoot on guitar, and DVDdesign on Bass. We played "Everlong" and I had at first intended to really "own the stage" singing until I realized that the song isn't very David Lee Roth. I saved that for when we closed out PAX playing "Hungry Like the Wolf".

Guitar Hero drums feel amazing and though it takes some real getting used to, I like them better than the Rock Band drums. Wailing on the cymbals just feels good.

The Conduit - My favorite sleeper hit of 2009. Yeah this game is going to rock face. As -D- played I stood next to him and talked to the lead programmer of High Voltage, the team developing The Conduit. He was super cool and I wish we had recorded all the things that myself and -D- asked him. The game is out in March of 09 and he said the graphics were about 80% final. Get very excited.

Well that's about it. Here's a picture of me playing Hoygeit's arm. 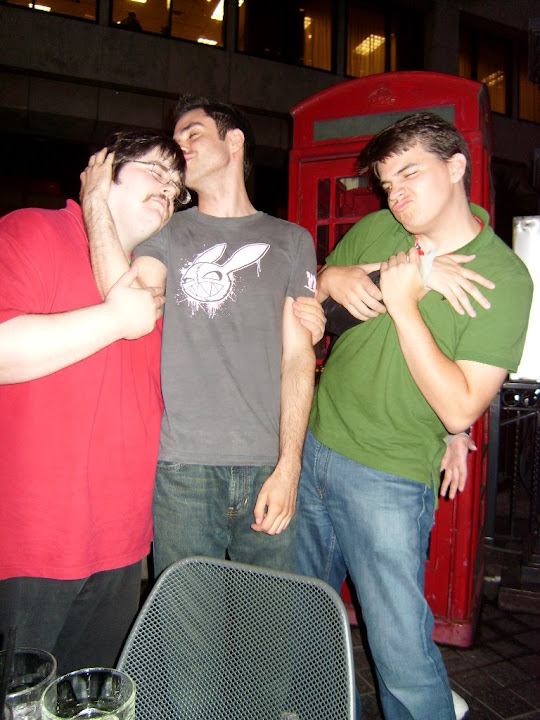 
Oh and I love you all and was totally grabbing ass with the rest of the group.
#Community
Login to vote this up!