5:00 PM on 09.01.2008 (server time)    0
It feels so good to go back at something you allready played and feel it still stands great the test of time. It sends the same good chills down your spine and you just want to play it.
I know it has only been a year after World In Conflict was released, but the game is awesome and I havent see anything that matches it in the RTS genre. And I have to add, Iam not an avid RTS gamer, but this one is special.

Have you played it? I know the games seems to be running late for the 360 and the PS3, also it was supossed that a PC expansion would have allready shipped, but it looks like is a 2009 release. Is a shame.

The game doesnt have a great story premise, but it works for me, is set on the eighties, rock and roll is here with the soviet invasion to the united states. Gameplay is solid, I dont know what they are planning to do with a console version... it seems to much to handle with just a joypad. At least for an old school ñaca ñaca player like me.
It also looks nice, very nice indeed. The enviroments is fully destructible to the point of "they are taking the apartments, lets demolish this damn city". You got to give credit to Massive for doing things right, graphics, sound and tactics. Even if you dont like the story, which I found to be very good, you just have to give them credit for doing so many things right. 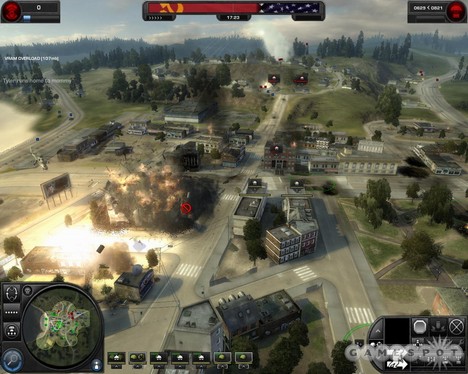 One of the things I dislike is just how short the story is. The story is told in a sort of voice acting over some stills of what looks to be game artwork between the campaign maps. Is not the best, but it works since the voice acting is very good (some known actor did it).

I dont want to start a discussion here, but if you tell me you get a new WiC or a new Starcraft, I will be more excited for the new WiC. Also replaying it I feel that so little worth of playing comes out for the PC nowadays, is a sad story, but the best releases seem to go under the radar, like this one. I know the game got a lot of attention, but I have to wonder how many people didnt play it just because it wasnt on the fail box of microsoft.

So, there you have it, if your PC can handle it, then try play to play this game the way an RTS is mean to be played (mouse and keyboard baby).
Also, nukes.
#Community    #PC
Login to vote this up!