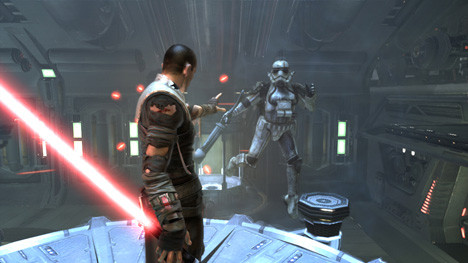 How did it play? Well, I've heard a number of different complaints about the controls, but I experienced no issues. The targeting was troublesome at times, but I found it no worse than a lot of targeting systems that I've handled in games. It was managable and it didn't hurt the game. I also didn't experience any slow-down, as some have reported on the 360. In a nutshell though, to answer the question of how it played: It played really damn fun.

On the easiest difficulty, one can truly wield the force like the dick that "The Apprentice" appears to be, casually tossing stormtroopers around, dangling them over their friends, making them kiss, etc. The second difficulty, presumably the equivalent of normal, was much more satisfying for me, providing more enemies to knock around, though slightly less room to toy with them. The hardest of the three available difficulties leaves no room for messing around, though it's entirely doable, even for someone with my limited abilities.

The quick-time events are somewhat annoying, as usual, but they're tolerable here and they produce pretty-damn-awesome results. Ultimately, whatever you may think of the game, the goal of The Force Unleashed is to have fun with the force, to be a badass force-user and enjoy yourself. That's it. As such, quick-time events appear to allow for a lot of awesome sequences that just aren't possible outside of cinematics, so they work well enough here.

Bottom line, this game delivered on every key expectation that I had. It controlled well, it was simple, it looked good, it was fun, it was engaging and- well, it was incredible. If they can draw out this level of fun and expand on it for an additional 10-15 hours (at least), then they will have possibly made the greatest Star Wars console game ever. I absolutely cannot wait until the full-length throwing-droids-out-of-windows simulator comes out, even if it means having to slay the hotness that is Shaak Ti.

Verdict: 9/10 sticky bombs (I'm too lazy to make a graphic, right now). Literally my only complaint is that the demo is much, much shorter than the miserable Too Human demo.

Also, in case you were wondering, The Apprentice, A.K.A. Galen Marek, uses the Shien lightsaber fighting style. You know you were wondering. Don't lie to me, you whore.
#Community    #Xbox360
Login to vote this up!